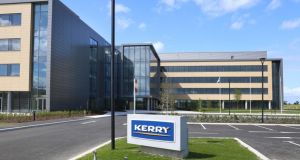 Kerry co-op Society’s sale of 800,000 shares in listed food company Kerry Group was priced at €112.5 apiece, a 2.5 per cent discount to the stock’s close on Tuesday, Bloomberg reported citing a personal close to the transaction.

The co-op will raise about €90 million from the share sale. The shares being sold represent 0.45 per cent of the company’s share capital.

A Bloomberg report noted that the seller will be subject to a 180-day lockup. Davy is the sole bookrunner for the shares.

Demand for the offering far exceeded the shares on offer, according to the person, with orders scaled back, meaning investor allocations were smaller than their requests. About 80 per cent of the deal went to the top 10 per cent of participants in the offering, the person said. Demand mostly stemmed from UK and European institutional investors.

Shares in Kerry Group had fallen 2.4 per cent by midday. – Bloomberg