What is the optimum professional life span for the rise and fall of a chief executive? 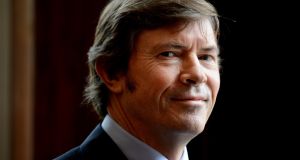 Aryzta chief executive Owen Killian: His position had become untenable after the group warned in late January that its earnings could plummet by 20 per cent this year as it lost biscuit and other baked goods contracts in the US. Photograph: Cyril Byrne

His position had become untenable after the group warned in late January that its earnings could plummet by 20 per cent this year as it lost biscuit and other baked goods contracts in the US. This was the latest in a series of profit alerts in the past two years.

To rub salt in his wounds, Aryzta’s share price spiked by more than 20 per cent following news of his resignation.

It was an inglorious end to what had been a gilded career with the company and its predecessor IAWS, of which 14 years were as chief executive.

Killian had succeeded Philip Lynch as chief executive of IAWS in 2003. They had made the company into a major success story in boomtime Ireland, bringing par-baked breads into our homes, and changing Irish convenience retailing forever.

Lynch moved on to run the IAWS co-op, later renamed One51. He was dismissed in 2011 following shareholder unrest about a failed acquisitions strategy and issues around his pay and governance at the company.

Lynch later endured a bitter dispute in court with AIB over his personal debts. It was an incredible fall from favour for one of the most successful Irish business executives of his generation. Killian’s long career has similarly ended on a bum note.

When is the right time for a chief executive to leave the stage ?

Most chief executives and executive search firms would tell you that seven years is the optimum time frame, give or take a year. And that internal candidates, who know the business and understand the culture, usually make the best replacements.

In 2015, a report released by the Conference Board in the US found that the average tenure of a departing S&P 500 company chief executive was 9.7 years.

Temple University studied 365 US companies from 2000 to 2010, measuring tenure and calculating the strength of both firm-employee and firm-customer relationships. The researchers found that the longer a chief executive serves, the stronger the firm-employee relationship becomes.

However, an extended period with the same chief executive results in a weakened firm-customer relationship over time. According to the study, the average chief executive holds office for 7.6 years, but the optimal tenure was 4.8 years.

The established narrative is the longer a chief executive stays, the greater the danger that the job will become routine, that they will stop listening to new ideas, that performance will slide, and that potential successors might quit in frustration. And change can be good.

At the other end of the spectrum, Michael O’Leary has piloted Ryanair since 1994 while Eamonn Rothwell has steered Irish Continental Group for 25 years.

There are extenuating circumstances for some of this longevity. O’Leary saved Ryanair from extinction by adopting a budget airline strategy in the 1990s and it’s hard to imagine the airline without him.

Murtagh’s father set up Kingspan in the 1960s, while O’Reilly took charge at Providence when his father, Sir Anthony O’Reilly, was an influential shareholder, and Heavey founded Tullow Oil.

One company that has successfully managed succession in recent times was AIB. Bernard Byrne was a senior lieutenant of former chief executive David Duffy, who left to run Clydesdale bank in the UK two years ago. The bank’s journey to recovery has hardly missed a step since he took the reins.

If Byrne were run over by a bus tomorrow, AIB’s finance chief Mark Bourke or Colin Hunt, the managing director of its wholesale and institutional banking operations, would arguably be fine replacements.

In November 2014, Killian was awarded the gold medal for industry by the RDS. Afterwards, he gave a telling reply to my colleague Eoin Burke-Kennedy when asked if he planned to slow down given that he was then 61. “In a business, more success brings more expectations and it’s a continuum. There’s nowhere to hide in a business. It’s like a treadmill,” he replied.

Killian’s resignation from Aryzta is a timely reminder to other chief executive and their boards about the dangers of a leader staying on too long and the need for proper succession planning.