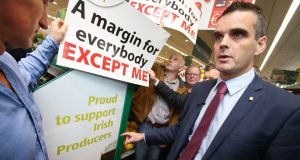 IFA president Joe Healy: “Agriculture and food cannot become a battleground between Brussels and London. There are too many farm livelihoods and jobs at stake.”

The retention of free trade for agriculture must be a key priority in the upcoming Brexit negotiations, the president of the Irish Farmers’ Association (IFA) has said.

He said no other sector or country was as exposed to the outcome of Britain’s exit negotiations.

“Agriculture and food cannot become a battleground between Brussels and London. There are too many farm livelihoods and jobs at stake,” he said.

Mr Healy was speaking as British prime minister Theresa May signalled Britain would not seek partial membership of the EU, a move that could threaten the tariff-free trade Irish agriculture enjoys with its nearest neighbour.

There is also a fear that British agriculture could be used as a “sacrificial lamb” in any post-Brexit deal the UK might do with Mercosur, the South American trading bloc, Mr Healy said.

Such a scenario could result in a flood of cheap food into Ireland’s biggest export market.

Mr Healy said politicians in Dublin and Brussels could not ignore the ongoing impact of the sterling devaluation, suggesting there was now a case for “direct aid” to farmers most affected.

There are provisions in the Common Agricultural Policy (CAP) to provide additional supports in cases of serious market disturbance.

“Farmers have taken most of the pain resulting from the weakness of sterling. Beef farmers took a hit of €150 million last year from this alone and mushroom growers saw their margins wiped out,” Mr Healy said. “These losses are a direct result of a political decision outside farmers’ control and cannot be tolerated,” he said.

In his speech, Mr Healy also touched on the issue of farm loans being sold on to so called vulture funds saying he had a strong message for both the banks and agencies dealing with distressed loans.

“We will not tolerate the vulture fund approach of stripping assets, with no regard for the family farm,” he said.

Approximately 200 farm loans are known to have been sold to US fund Cerberus.

Mr Healy was elected as IFA president last year in the wake of the organisation’s high-profile pay debacle.

He said substantial progress has been made on the renewal of IFA, noting a number of improvements related to governance, transparency and IFA income had already been implemented.

He said pay levels across the organisation were now independently benchmarked.

Mr Smith departed the IFA on bad terms in late 2015 amid controversy over his €500,000 remuneration.

He is suing the farmers’ organisation over his €2 million severance package, which has so far been withheld.