Investors back €751m takeover of Fyffes by Sumitomo 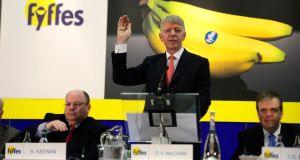 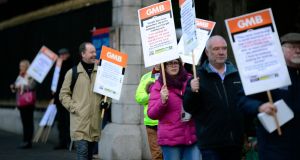 Protestors highlight the plight of workers at Fyffes group subsidiaries in Honduras and Costa Rica outside the company’s egm at a Dublin hotel on Monday. Photograph: Cyril Byrne

Fyffes’ €751 million takeover by Japanese group Sumitomo Corporation was approved by investors on Monday, as demonstrators outside the meeting in Dublin highlighted the plight of workers at group subsidiaries in Honduras and Costa Rica.

“It’s an historic day in the company’s history,” said executive chairman David McCann, whose grandfather, Charles, set the foundations for the group when he opened a fruit-and-vegetable shop in Dundalk in 1902, as shareholders approved the deal in a series of votes in a Dublin hotel.

The €2.25-a-share cash deal, announced on December 9th, is likely to close in mid- to late February, depending on necessary High Court and various regulatory approvals, Mr McCann said.

It would end the tropical-fruits distributor’s 3½ decades as a Dublin-listed company and result in an €87.5 million payment to the McCann family for their almost 12 per cent stake as well as potential bonus payments this year of up to €3 million for executive directors.

The shareholder votes took place against the backdrop of about a dozen protesters demonstrating outside the meeting about conditions faced by mainly seasonal female workers at Fyffes’ Anexco pineapple subsidiary in Costa Rica and two melon units in Honduras.

The protestors, led by UK not-for-profit organisation Banana Link and trade union GMB, highlighted alleged instances specific to Fyffes’ Suragroh subsidiary in Honduras, where workers failed to receive minimum wages and social insurance, were exposed to hazardous agrochemicals and were sacked for being union members.

Mr McCann said Fyffes “has a different perspective to the protestors”, declining to comment further.

The Ethical Trading Initiative (ETI), a UK government-sponsored alliance that Fyffes has been a member of since 2002, has been looking into some of the claims for almost a year. In a statement, last updated on its website on Friday, the ETI said its executive director “upheld key aspects of the complaint, deeming them substantive and robust” and added that it had asked Fyffes to respond by February 3rd with a remediation plan.

An ETI spokeswoman declined to say specifically what elements of the complaint had been upheld.

Meanwhile, Ted Eguchi, senior vice-president and general manager of Sumitomo’s food business group, told The Irish Times after the shareholder meeting that Fyffes new owners would take a fresh look into the issues.

“Obviously when you are in the farming business, you do have those issues,” Mr Eguchi said. “But we have to . . . make sure we do the right thing and we’ll look into what they’re asking for and what they’re protesting about. And if there are things that need to change, they’ll change.”

Meanwhile, Mr Eguchi said that while the Japanese group planned to keep Fyffes’ management team, it would move some of its executives from New York or Tokyo to Dublin to take up as-yet unassigned roles.

He also said that Sumitomo may eventually combine Fyffes with its existing banana-importing business down the line in five to 10 years’ time.

8 Checking in? No thanks. I’m just here to use the wifi