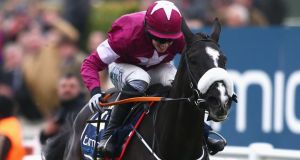 Brexit poses a threat to €225 million in bloodstock exports to Britain and other key elements of the racing industry, the sport’s administrative body warned at the weekend.

Britain is Irish racehorse breeding’s biggest export market, taking eight out of every 10 thoroughbreds that are sold abroad, a business that is worth €225 million a year to a largely rural industry.

Brian Kavanagh, chief executive of State body Horse Racing Ireland (HRI), said weakened sterling and the risk that the UK’s exit from the European Union would result in trade barriers could damage the sector.

“Britain is the main market for both flat and national hunt horses and that would be at risk,” he said. “Any barrier to trade flows or the exchange rate could make Irish horses more expensive or result in lower returns to vendors.”

Mr Kavanagh pointed out that the subsequent weakening of sterling in the wake of the UK electorate’s decision last June would have reduced the spending power of a British buyer with £100,000 sterling to €110,000 from €127,000 a year earlier.

In a further complication, he suggested that an agreement between the Republic, the UK and France allowing racehorses to move freely between the three may be called into question due to Brexit.

Leaving the bloc could also allow the UK to introduce incentives for its breeding industry that the EU could prevent the Republic from matching. A decade ago the European Commission ruled that an Irish tax break on stud fee profits contravened the union’s competition law.

A hard Border with the North could also hit racing’s status as an all-Ireland sport. Racing is run at Downpatrick and Down Royal under Irish rules, while HRI provides both tracks with funds for prize money and capital spending.

About 90 per cent of competitors at both venues are trained in the Republic. In addition, the Irish Turf Club, based at the Curragh in Co Kildare, licenses trainers in Northern Ireland.

Mr Kavanagh’s warning comes as the sport begins warming up for the yearly showdown at Cheltenham, which begins four weeks from tomorrow and will attract the best national hunt horses from both sides of the Irish Sea, along with thousands of Irish racegoers.

In turn, the Republic attracts 80,000 racing tourists from Britain every year, who come to high-profile meetings such as Punchestown. A weaker sterling also poses a threat to this.

Racecourses themselves face a further threat from a poor exchange rate as they will receive media rights payments in sterling from 2019 to 2023.