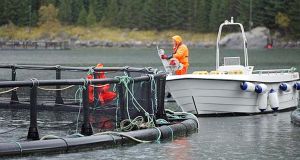 A Norwegian salmon farm: The industry, worth a record €7.5 billion there in 2016, has been hit by an outbreak of sea lice

Salmon devotees should prepare to pay more for their smoked sides and grilled fillets after a leap in prices to record levels last year.

Severe outbreaks of sea lice in Norway and Scotland as well as a deadly algae bloom that hit Chile in early 2016 meant supplies of global farmed salmon fell almost 9 per cent from the previous year, the first decline in six years and the steepest fall in a quarter of a century.

Reflecting the price surge on the spot market, wholesale contract prices between salmon producers and their customers this year are expected to rise sharply. This is likely to force retailers and restaurateurs to either raise prices, cut portion sizes or opt for other types of fish, such as cod or sea trout, according to food industry executives and analysts.

“We’re expecting the price to remain high for the rest of this year, simply because of the time it takes for young fish to grow to the size that chefs want,” Rachel Dobson, managing director of Lynx Purchasing, a UK catering and food service buying specialist, said. “As a result, we are seeing some operators reduce the size of salmon portions or remove salmon from menus altogether.”

In the first half of last year, Chile’s salmon farms were hit by a severe toxic algae tide that killed millions of fish. Believed to have been caused by high sea temperatures due to the El Niño weather phenomenon and a lack of rainfall, the outbreak led to Chilean salmon production declining almost 25 per cent last year, according to estimates from Norwegian bank Nordea.

Later in the year, sea lice issues led to a 6 per cent production fall in the world’s largest supplier of salmon, Norway. This meant that global 2016 supplies fell 8.7 per cent to a three-year low of 2.1 million tonnes, said Nordea.

With last year’s global demand estimated to have grown about 25 per cent, according to the Norwegian seafood council, spot prices soared, jumping to almost 80 Norwegian krone (€8.8) a kilogramme.

Demand for salmon has been growing steadily over the past decade thanks to increasing health consciousness among consumers and the rising popularity of convenient fillets in supermarkets. Consumption on average has risen 12 per cent since 2002. Supplies need to grow on average 200,000 tonnes a year for prices to remain stable according to Paul Aandahl, an analyst at the Norwegian seafood council.

The sharp rise in salmon prices has meant the fish has “completely decoupled from competing proteins over the past 18 months,” said Kolbjorn Giskeodegard, an analyst at Nordea. “We expect to see cod and other convenience seafood products conquering retail shelf space at the expense of salmon.”

The long-term contracts between salmon producers and their buyers normally have a 9-12 month duration, and largely reflect prices in the market the year before.

“In early 2017, we expect there to be massive repricing in the contract market,” which is likely to mean higher prices for consumers, Mr Giskeodegard said. “This also represents a risk of a demand setback.”

The Norwegian seafood council expects demand to remain flat in 2017. Some analysts say consumption could fall as salmon portions are cut, or the fish is substituted by other species such as cod, pollock and trout, which offer better value for money.

On the supply side, higher prices are expected to encourage output. However, with legislative limits on growth both in Norway and Chile, global production is expected to remain lower than it was in 2014 and 2015.

“We do not expect supply to grow above demand in 2017,” said Rabobank, the Dutch agricultural lender.

With most of the expected 4-5 per cent rise in production predicted to reach the markets only in the second half of the year, salmon prices are forecast “to remain at elevated levels for at least the first half of the year, as global supply is likely to remain tight”, the UN Food and Agricultural Organisation said. Norway’s late summer harvest in the third quarter could push prices down to 60 krone (€6.60) a kg, it added.

The prevailing supply shortage and elevated prices will provide a boost to salmon producers and exporters. Norway exported salmon worth a record €7.5 billion in 2016, up almost a third from the year before, according to the Norwegian seafood council. This was despite a 5.2 per cent fall in export volume to 980,000 tonnes.

However, for consumers, the prospects are far from appealing.

Lynx Purchasing’s Ms Dobson said she is advising customers to keep menus flexible by using “specials boards” or menu descriptions such as “catch of the day”, using whichever species is in strongest supply at the time.

While that strategy will be easier for independent pubs and restaurants, which can change their menus easily, it will be “more of a challenge for the bigger-branded operators who have fixed menus across a whole chain,” she added.