Cheltenham index could be a measure of our success 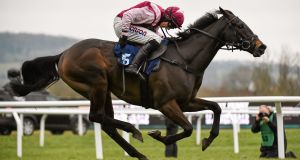 One answer to the recent debate about the way we measure our economy’s performance could be to introduce a “Cheltenham index”. The Cotswolds racecourse, whose four-day festival draws figures from the Irish horseracing industry and racing fans in their droves every March, published figures yesterday showing that visitors from here spent €22.3 million there last year.

Alongside this, Cheltenham pointed out that analysis of its ticket-booking data showed that the number of people travelling over has increased annually since 2010 to the point where last year, 14,343 visitors from Ireland attended each day of the meeting.

In this country, the festival’s profile goes beyond racing and coverage of it regularly makes the jump from the sports pages to general news. However, as Ian Renton, south west regional director of the course’s owner, Britain’s Jockey Club, pointed out, the study by the University of Gloucestershire, was the first time anybody put a value on the event’s popularity with Irish people.

Not surprisingly that number is substantial. Last year, Irish racegoers spent an average of close to €1,600 each. They contributed €2.6 million direct to the racecourse in entrance fees, spent €5.3 million on entertainment, including betting, €4.5 million on food and drink, and €4.1 million on accommodation.

Most of that is focused on Cheltenham itself, so it must have a noticeable impact on a town with a population of 110,000. No doubt its pubs, restaurants, hotels and guest houses would miss the Irish if they stopped coming.

There is, of course, little fear of that. The countdown is now seriously under way and judging from the tenor of Renton’s remarks yesterday, it is likely that 2017 will at least equal 2016.

Instead of wrestling with new national accounts models, perhaps the Economic Statistical Review Group should simply measure how many make the annual pilgrimage to Cheltenham and how much they spend. It could become a proxy for economic performance, Presumably, the more people who go and the more they spend, the better things are.

Mind you, that would miss Cheltenham’s greatest value, which is that it allows the fans who travel over or watch from home to forget about the economy and all other cares for four days.