Brexit: Farmers call for clarification around customs and food products 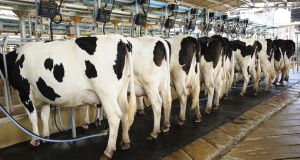 Some 30% of milk produced in Northern Ireland goes to the Republic. Photograph: iStock

Farmers’ groups in Northern Ireland and the Republic have called for clarification on how food processed in each other’s markets would be treated under the proposed Brexit deal.

The Irish Farmers’ Association and the Ulster Farmers’ Union expressed concern at the Seanad Special Select Committee on Brexit about the terms of the proposed agreement on the UK’s withdrawal from the EU and its effect on the all-Ireland economy. They are particularly worried about the cross-Border processing of agri-food products.

Joe Healy, president of the IFA, said the organisation supported the new arrangements under the Brexit deal that would keep the North practically under EU customs rules but legally remaining in the UK market, but added that it wanted “full clarity on how trade flows will work in practice”.

“We need clarity on the precise arrangements for Irish beef exports travelling across the Border into Northern Ireland out through Larne to Britain,” he said.

When it came to Northern milk being processed in the Republic, Northern farmers and co-ops in the Republic need “a clear commitment that this product can be labelled as Irish and EU as it will continue to be in compliance with EU rules,” Mr Healy told the committee.

The IFA chief said that he believed that the Brexit arrangements would mean Northern Ireland would have “the best of both worlds”, though Ulster Farmers’ Union deputy president Victor Chestnutt did not agree.

“We are not so sure on that. There are some things we need clarification on,” Mr Chestnutt told the committee.

He expressed concern about what would happen to the 40 per cent of Northern Ireland’s lambs and 30 per cent of milk that goes to the Republic and whether they would branded and marketed as Irish/EU produce.

“The food industry on the island of Ireland is completely integrated and to try to rip it apart makes no sense at all,” Mr Chestnutt said.

“We are getting conflicting clarifications,” said Mr Chestnutt, pointing to the contradictory information coming from EU commissioner Phil Hogan’s office and the UK government.

The IFA and Irish Creamery Milk Suppliers Association have both called for a longer transition period which would kick in after the UK leaves the EU and last until December 31st, 2020. Mr Healy warned about the “seriously damaging” uncertainty for farmers around a “new cliff-edge” at the end of the transition period.

He has called for money to be paid out to farmers “who have already experienced Brexit losses” from the €110 million fund announced in this month’s Budget by Minister for Finance Paschal Donohoe for agri-businesses affected in a no-deal Brexit scenario.

Meanwhile, a UK government delegation has advised Irish businesses that for four weeks after a no-deal Brexit, the British authorities will not insist on customs declarations being filed as they enter British ports but permit them to file the returns after the fact in order to prevent congestion and delays at the port of Holyhead in Wales.

“The UK government will be prioritising flow over revenue. If a truck does not have all the customs processes completed, it will get waived through,” said a UK official visiting the British embassy in Dublin.

The London government was still working with business groups in Northern Ireland to see what the UK government could do to reduce the administrative burden on Northern firms linked to exit summary declarations that they have to file on goods moving from the North to Britain and to customs declarations.

The official said that there was “quite a lot you can do” for large companies to reduce the administrative burden and that the UK and EU would have the transition period to address these issues, if the Brexit deal is approved, to work through this.