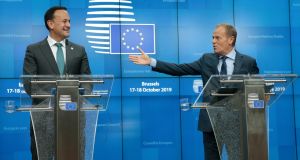 Taoiseach Leo Varadkar and president of the European Council Donald Tusk during a press conference at the Brexit summit in Brussels. Photograph: Olivier Hoslet/EPA

European leaders on Thursday night approved a Brexit agreement with the UK that reflected only slight changes – amendments to six paragraphs dealing with Ireland – to the 600-page withdrawal agreement reached with former prime minister Theresa May.

The rest of the agreement, which has been rejected three times by the UK parliament, remains intact, and the whole thing now goes to the House of Commons on Saturday, and then to the European Parliament, for ratification.

All being well, Brexit will now happen on UK prime minister Boris Johnson’s schedule of midnight on October 31st.

A beaming Taoiseach Leo Varadkar, unusually, joined the leaders of the EU institutions, Jean-Claude Juncker and Donald Tusk, on stage at a press conference to announce the approval of the full legal text by EU leaders.

Mr Tusk, the European Council president, turned towards Mr Varadkar to acknowledge the special place of Ireland in the talks:

“Why has a deal that was impossible yesterday become possible today?” he asked. “Firstly, the new version of the deal has been positively assessed by Ireland. I’ve said from the beginning that we would always stand behind Ireland, and not force a deal unfavourable to Dublin.”

He spoke of what had made the deal possible: “The key change in comparison with the earlier version of the deal is prime minister Johnson’s acceptance to have customs checks at the points of entry into Northern Ireland. This compromise will allow us to avoid Border checks between Ireland and Northern Ireland, and will ensure the integrity of the single market.”

The council’s “conclusions” were brief and to the point, diverging only slightly from those in November, when another deal had been approved. They record the endorsement of both the revised withdrawal agreement and the political declaration on the future relationship between the EU and the UK and invite “the commission, the European Parliament and the council to take the necessary steps to ensure that the agreement can enter into force on November 1st, 2019, so as to provide for an orderly withdrawal”.

They included no mention of a possible extension beyond October 31st, which European Commission president Jean-Claude Juncker dismissed as unnecessary.

All three men expressed their sadness at Brexit but said they recognised the democratic “will of the British people”.

German chancellor Angela Merkel, echoing similar sentiments to Mr Varadkar, said the deal demonstrated the power of EU unity. “We have shown that the EU 27 have stuck together,” she said. “I am feeling quite optimistic.”

French president Emmanuel Macron said: “This agreement seems ... like a good compromise which allows us to meet all [our] ... aims.”

Asked what he would say to the 48 per cent of UK voters who had supported voted to remain in the EU, Mr Juncker said sadly: “I would like to say to the 48 that they were right.”

Incoming commission president Ursula von der Leyen, who is due to take over from Mr Juncker at the end of November, said it was important Brexit happened “in an orderly way, as that’s decisive for people and for the economy. It’s also decisive for the starting point of the future relations we’ll have with Britain”.

But she said she was cautious about whether Mr Johnson could secure a Commons majority, and one of her new vice-presidents, Frans Timmermans, said he had “stopped trying to predict what the British parliament will think of it”.

On Thursday night EU leaders were set to discuss Turkey – its invasion of northern Syria and illegal drilling off Cyprus. They were expected to endorse sanctions and an arms embargo approved by foreign ministers on Monday. Sources said there may be some attempt to increase the pressure on Ankara.

And they will debate the possibility of opening accession talks with Albania and North Macedonia. Although the process is likely to take many years, it is being held up by a small number of states, led by France, which wants the whole system reformed before any new applicants are considered. Tempers, it was anticipated, might fray.