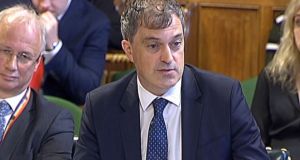 Unionist MPs have branded the British government’s approach to the North in Brexit talks as “despicable” and a “betrayal”.

In his first appearance before the Northern Ireland affairs select committee, Northern secretary Julian Smith was questioned about plans to require businesses selling or transiting goods from the North to Britain to complete special paperwork in order to trade post-Brexit.

Mr Smith said the checks would be minimal, and the focus should be on the “great opportunities” awaiting Northern Ireland. He said the British government would work with businesses to ensure the Withdrawal Agreement Bill would as far as possible allow unfettered trade between the North and Britain.

Ian Paisley, the DUP MP for North Antrim, said it was disgraceful to expect any business to complete paperwork for goods being sold in “our country, not a foreign country”.

In a tense exchange he asked Mr Smith where he lived. When Mr Smith told him he lived in north Yorkshire and London, Mr Paisley said: “If you had to move goods from north Yorkshire to London and have to fill in a form, you’d feel pretty aggrieved about that. We are in the same country. It is disgraceful.”

The committee also heard that £15 million of taxpayers’ money has been spent on Stormont politicians include members of the legislative assembly (MLAs) since it collapsed in January 2017. MLAs are being paid almost £36,000 (€41,700) a year for not sitting, while the speaker of the chamber is being paid £56,000 (€64,900) a year having sat for one day in almost three years.

Independent unionist MP Sylvia Hermon said this was “absolutely outrageous”, and Mr Smith admitted it was “unacceptable” but stopped short of vowing to cut the salaries.

He argued it was best to focus on getting Stormont restored because the alternative – direct rule from Westminster – was worse.

The DUP had previously accepted that regulatory checks would be needed on goods moving from Britain to Northern Ireland as a concession designed to obviate the need for checks on the Irish Border. The plans for checks on goods going the other way emerged on Monday.

Mr Smith tried to offer reassurances, but was laughed at when he said the latest chapter in Brexit was a “healing process”.

The DUP’s Jim Shannon said it was an “absolutely despicable deal”, and the union flag in Northern Ireland was hanging “a wee bit tattered at the moment”.