Who should the EU deal with in the UK and should it help them remain or leave? 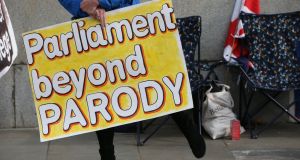 “It is obvious that the British parliament is utterly divided both on the principle of Brexit and on how to handle it.” Photograph: Jonathan Brady/PA Wire

Now that it is clear that UK prime minister Boris Johnson will be unable to get his new Brexit deal approved by the existing deadline of October 31st, the European Union has to consider the question of a further extension.

There is no doubt that Johnson’s three communications to the president of the European Council, his three-letter-trick, constituted a fully valid request for a further Brexit extension. His decision not to put his signature to one letter was so that he could claim to the tabloids that he had not signed any such request. However, the sending of a cover letter by the British ambassador to the EU made clear that the attachment could be nothing other than a formal communication from the British prime minister.

The ball remains in London’s court. As the EU’s chief Brexit negotiator Michel Barnier has indicated, greater clarity on London’s intentions is required before the EU takes its decision.

The EU faces two potential dilemmas. The first dilemma is that the current blockage in Westminster obfuscates the normally straightforward question of who the EU should be dealing with in London. Normally, the interlocutor of the 27 European heads of state or government should be the prime minister who is not only their opposite number but also, let us remember, still a member of the European Council. Johnson’s European colleagues know full well what his real wishes are and they will want to continue to deal with him in good faith.

At the same time, it is obvious that the British parliament is utterly divided both on the principle of Brexit and on how to handle it. The answer to this dilemma must surely be for the EU to deal with Britain’s democracy in all its current complexity by recognising that the House of Commons has constrained the prime minister to request an extension whether he likes it or not.

The other dilemma is the spirit in which the European Council should approach any further extension. On this, it is pulled in two directions. On the one hand, it knows that Brexit will be damaging for everyone, even if the greatest damage will be to the UK itself. It understands that the very fact of Brexit poses inevitable, and to an extent insoluble, problems especially in relation to Northern Ireland. Moreover, it cannot but have significant sympathy for the growing enthusiasm of British pro-Europeans and for the immense courage of those parliamentarians in Westminster who continue to seek to advance the UK’s real long-term interests.

On the other hand, the EU is aware that the long-running European psychodrama, with its origins deep in England and the Conservative party, simply can’t be allowed to go on forever. It recognises that the second version of the withdrawal agreement, in which it has again bent over backwards to accommodate the stated concerns of the British government, is highly imperfect but would allow the UK, subject to a parliamentary majority, to leave with a modicum of dignity.

In a sense, this dilemma brings Europe’s head into conflict with its heart. Europe’s heart tells it that it would be far preferable for the UK to remain as a respected and influential participant in our common project for prosperity and peace. The EU’s head, however, tells it that the turbulence and uncertainty cannot go on forever. The head is probably winning the argument.

The members of the European Council will await further clarification from the British government this week before taking their decision. They will approach the question with the common sense which has characterised their approach so far; and which has manifested itself in Barnier’s unfailing calmness and courtesy.

Neither European Council president Donald Tusk nor European Commission president Jean-Claude Juncker have a pre-cooked answer to the extension request sitting on their desks or in their drawers. The European prime ministers will not be lined up in different camps of the type to which some British media love to assign them. Each member of the European Council, representing a democracy every bit as vibrant, if not as volatile, as the UK’s, will consider how best to respond to the extension request, taking account of the complex issues involved and of the shared interests of the member states, which include a friendly and constructive relationship with the UK.

Everything about Brexit remains unpredictable. However, it seems likely that the EU will grant an extension until the end of January, because that is the length the British prime minister has requested; with the possibility of that extension being foreshortened if the UK ratifies the deal. Any longer or shorter extension might leave the EU open to the accusation of interference in domestic British politics. Tusk’s suggestion that the extension be approved by written procedure, rather than requiring a meeting of the European Council, would further underline that the EU is simply responding to a British request.

Bobby McDonagh is a former ambassador to London, Rome and the EU