Brexit impacts on profits and bloodstock sales at Goffs in Kildare 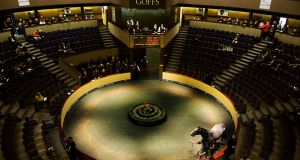 A record €3.2 million Irish sale for a yearling filly at Goff’s annual Orby sale was not enough to prevent a 33 per cent slump in pre-tax profits to €2.28 million at the bloodstock business this year.

New accounts filed by Kildare-based Robert J Goff & Co plc show the business recorded the sharp drop in pre-tax profits after ring revenues declined by 6 per cent to €165.63 million in the 12 months to the end of March 2019.

Goffs chief executive Henry Beeby said “record prices grab the headlines but consistency is required at all levels to deliver growth and that was not achieved in this 12-month period”.

Mr Beeby said that the drop in ring revenues was more likely a combination of circumstances including Brexit, over-production and other factors.

In his report, Mr Beeby said that the Orby is the company’s highest earning sale every year and did not disappoint with a record turnover of €43.5 million.

He said the sale of the world’s two highest-priced yearling fillies of the year at €3.2 million (by Galileo out of the proven black type producing mare Aleagueoftheirown) and €2 million underlined Goffs “consistent performance of achieving the best for the best”.

Ms Mulhearn said, however, that the year was “satisfactory”, stating that the company had performed well in many sectors with the exception of the November breeding stock sale.

Ms Mulhearn said that in view of the financial performance of the company, the board was recommending a reduced dividend of 5.5 cents per share totalling €366,000. This compared to 8.5 cents per share in 2018 amounting to €566,000.

Founded in 1866, Goffs operates from a 78-acre site near Kill in Co Kildare. Ms Mulhearn said the lands at Goffs have started to deliver for the company after confirming that a new Circle K service station was performing well while discussions with a major hotel operator are progressing well.

“The year ahead poses many potential challenges with the possibility of a no-deal Brexit and global economic clouds gathering rather ominously,” Ms Mulhearn said.

Shareholder funds totalled €31.6 million, including accumulated profits of €16.36 million. The group’s cash reduced from €2.5 million to €1.1 million during the year.