Farm supports not enough to protect against potential ‘agricultural armaggedon’ 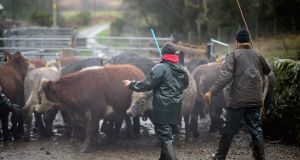 Budget 2020 will come as a ‘profound disappointment’ to farmers, according to the agricultural lobby, which accused the Government of not doing enough to avoid an ‘agricultural armaggedon’. File photograph: Jeff J Mitchell/Getty Images

Budget 2020 will come as a “profound disappointment” to farmers, according to the agricultural lobby, which accused the Government of not doing enough to avoid an “agricultural armaggedon”.

Minister for Finance Paschal Donohoe announced a €110 million no-deal Brexit support package for the Department of Agriculture, Food and the Marine, and a separate increase of €51 million in exchequer funding.

However, farming groups were quick to criticise the Government for not going far enough to support the sector in the face of Brexit headwinds.

Beef farmers secured €100 million in support from the Government and European Commission earlier this year, but the Irish Farmer’s Association (IFA) said that once this funding runs out, the sector will only be given new financial support when and if a no-deal Brexit takes place.

Cattle slaughtered after May 12th last are not eligible for the scheme, and only €80 million of it has been drawn down, raising a question among farm groups as to what will happen to the remaining €20 million.

The IFA said its members were already battling the impact of Brexit and that while the €110 million committed in no-deal supports was a step forward, “much more will be needed” as farmers are already suffering losses due to Brexit uncertainty.

Minister for Agriculture Michael Creed raised the possibility of EU providing “very significant” financial support to the State in addition to the funds being allocated by the Government to protect against Brexit.

He said the Government had “deliberately” not put a figure on how much it might receive from Brussels but that it would be “as ambitious as possible” when seeking “very significant EU funding” to “augment” the budget.

“This is a very substantial firewall for us to protect the most significant indigenous industry - the ag-food and fisheries - and if more is needed, it will be available,” he told reporters, referring to the contingency plan.

IFA president Joe Healy called on the European Commission to “put its Brexit funding cards on the table”. He said the funding provided for the agri-food sector to date will fall short of what will be needed as Ireland faces “an agricultural armageddon”.

Pat McCormack, president of the Irish Creamery Milk Suppliers Association (ICMSA), said the budget would come as a “profound disappointment to farmers in general” and that there was “no sense of urgency being communicated around the threat facing Irish farming at this time”.

The ICMSA and the IFA criticised the 1.5 per cent increase in commercial stamp duty, which they said would hit farmers trying to expand their holdings.

Farm restructuring relief, which provides a shelter from Capital Gains Tax for land that is sold to make a farm more efficient, was extended to the end of 2022 with no change to the conditions of the scheme.

The IFA welcomed a €3 million allocation for pilot agri-environmental schemes, but said it was “very modest”. The increase in the earned income tax credit was also welcomed, but Mr Healy said farmers will be disappointed as it had not reached the level committed to in the programme for government.

Separately, a government spending review paper raised the prospect of cuts in payments to farmers who lose animals to bovine tuberculosis. The review of the programme, which costs the exchequer €47 million per year, found that “the level of financial supports should be re-examined following an independent cost-benefit analysis of the entire programme”.

The State pays the shortfall between the salvage value of cattle infected by TB and the market value of a healthy animal to mitigate the impact on farmers of culling sick cattle. There are several other grants, including a hardship scheme and a depopulation grant, available for farmers. The review found that “the system of financial support in Ireland is unique in providing compensation above the valuation of an animal”.