Farmers and business in North await detail on Brexit deal 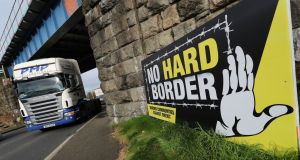 Business and farming interests in North say more clarity is needed about how the deal would actually operate but all relieved as hard border prospect fades. Photograph: Niall Carson/PA Wire

The Brexit deal raises “more questions than answers” according to farming leaders in the North, who view the latest agreement as “complex and bureaucratic”.

The Ulster Farmers’ Union, which represents both farmers and growers in the North, said more clarity is needed about how the deal would actually operate.

It said that, while the latest proposals did appear to address concerns about regulations and tariffs, it was far from clear cut.

“In particular, we need clarity and detail around Northern Ireland’s access to EU trade deals once the transition period ends.

“If we are excluded, this would have a significant impact on trade between Northern Ireland and the Republic. We also need more certainty around the details of Northern Ireland’s unfettered access to the GB market.

“Our key objective from day one has been to secure trade that is as free and frictionless as possible east/west and north/south,” the UFU said in a statement.

The farmers body has consistently warned that a no deal Brexit would be the “worst possible outcome” for Northern Ireland’s family-run farm businesses. On Friday it again called for a no deal Brexit to be “avoided”.

Separately the Northern Ireland Food and Drink Association said it “broadly” welcomed Boris Johnson’s Brexit deal. It, too, has warned repeatedly that it would be “disastrous for Northern Ireland, particularly for the agri-food sector” if the UK were to crash out of Europe,

Brian Irwin, chairman of the association, said a no deal Brexit is “unthinkable for the food industry”.

Mr Irwin, who is also the chairman of Irwin’s Bakery, said: “As a nation and an economy, Northern Ireland is uniquely affected by Brexit, not least as the only part of the United Kingdom to share a land border with an EU member state.

“As an industry, we cannot operate with a border on the island of Ireland, nor can we absorb tariffs to export to Europe. We need a workable solution. The UK - EU withdrawal deal we can broadly welcome. It offers important safeguards for Northern Ireland businesses to continue trading east-west and north-south.”

But Mr Irwin said there was still a significant amount of detail about the Brexit agreement to be “worked out”, particularly around the issue of VAT.

“We would urge flexibility from our political leaders at this time in order to progress with a deal,” he added.

Aodhán Connolly, director of the consortium, said: “Retailers and consumers have long weathered under Brexit uncertainty and each passing day represents time, money and effort that struggling retailers can ill afford.

“With the Brexit clock still ticking down to a chaotic no deal it is finally time to take this risk off the table for good.”