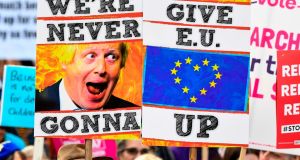 A London march by the People’s Vote organisation calling for a final Brexit say in a second referendum. Photograph: Niklas Halle’n/AFP via Getty Images

The EU is adopting a wait-and-see approach to events in London, delaying a vote in the European Parliament while Donald Tusk takes his time over consulting with EU leaders about a further Brexit extension.

Irish Government sources say the attitude in Dublin is the same, officials saying they will watch how events play out in Westminster before deciding on a way forward.

The European Parliament will not vote on the new Withdrawal Agreement until the British parliament has decided whether or not to ratify the deal, its Brexit co-ordinator Guy Verhofstadt said on Monday.

The parliament’s Brexit Steering Group met and decided to advise the leaders of the main groupings in Strasbourg to wait until Westminster had decided on the new deal before putting it to a vote.

If the European Parliament does not ratify the deal this week it is not scheduled to meet in plenary session again until November. However, EU sources said that a special plenary session could be convened next week to ratify the deal before the October 31st deadline if Westminster approves the agreement in the coming days. For now, however, sources in Brussels say the EU is adopting – again – a wait-and-see attitude.

Mr Tusk, the head of the European Council of EU leaders, is also consulting with the leaders on the British request for an extension, though the process is not being done in a hurry, sources said. As of Monday night Mr Tusk had not yet spoken to Taoiseach Leo Varadkar.

Informal contacts with the British government suggest that there is some confidence in Downing Street that British prime minister Boris Johnson can secure parliamentary approval for the agreement despite the defeat on a related amendment last Saturday. “All eyes on Westminster,” said one government source, adding: “again.”

Mr Johnson plans to present the Withdrawal Agreement Bill to the House of Commons on Tuesday , though opposition MPs and Tory rebels are likely to table amendments, including one calling for a second referendum and another for the UK to remain in the EU customs union.

Ministers are likely to be briefed by Mr Varadkar and Minister for Foreign Affairs Simon Coveney when they meet for the weekly Cabinet meeting on Tuesday morning. Ministers will discuss the situation in London, as well as reviewing ongoing no-deal preparations.

The Taoiseach will also report to the Dáil on the outcome of last week’s summit, when he will be questioned by Opposition leaders.

EU leaders declined to rule out an extension at last week’s Brussels summit in the event that Mr Johnson fails to get the deal passed at Westminster. While the EU’s position has been that an extension should only be passed if there is a clear purpose for it – such as a general election in the UK or a second referendum – privately Government sources admit that in a choice between a no-deal exit and an extension for any reason, Dublin would back an extension.

It is thought that a short extension could be granted without the need for a summit of EU leaders, but a longer extension – as favoured by some in the UK – would require EU leaders to meet and the debate the issue before the end of the month.