Caveat: Ireland is over-pubbed and the drop in numbers was inevitable 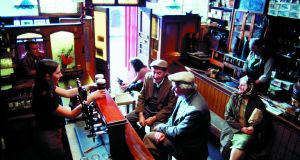 The decline in the number of rural pubs was the pretext for a call by the Drinks Industry Group of Ireland for a cut in excise in Budget 2019. Photograph: Brian Lynch

The large companies – mostly multinationals – that manufacture the beers and spirits we guzzle know their five-year campaign for a cut in drink taxes is a tough sell.

There is a housing crisis, a shortage of teachers and nurses, and sick kids can’t get medical cards. Take a ticket and join the queue, Big Drink, and we’ll examine your request for a tax boost just as soon as we’ve scrubbed away this damned stubborn child poverty.

So to keep their campaign at the forefront of politicians’ minds – and to sprinkle it with some of that magic small-business morality dust – Big Drink has roped in the cuddly tourism industry and struggling publicans to front its campaign. In a world of hard necks, it is a tungsten move.

The pub is a cornerstone of Irish culture. If Jamie Oliver’s Jamaican jerk rice dish apparently can be a heinous act of “cultural appropriation”, then what do you call using Irish village pubs to seek excise cuts that will exponentially benefit the likes of Diageo (headquarters in London), Amsterdam-based Heineken and France’s Pernod Ricard?

Nobody is being coerced, of course. Publicans are only too willing to allow themselves be put forward as fodder for publicity campaigns seeking excise cuts that will benefit their multinational suppliers far more then it will them.

But they should be wary. Pubs and other small tourism businesses have more pressing issues closer to home for which they should reserve their lobbying capital.

This week, the decline in the number of rural pubs was the pretext for a call by the Drinks Industry Group of Ireland (Digi), which is dominated by Big Drink but also includes pub and hotel groups, for a cut in excise in Budget 2019 to “encourage growth” in the hospitality sector.

The sector is growing just fine. Tourist numbers and employment are at all-time record highs. Seven or eight cents knocked off the price of a pint – provided the Diageo-Heineken beer supply duopoly even passes on the excise cuts that the drinks industry has sought – would be just a burp in the wind for pub owners seeking growth.

The Digi statement on Wednesday was fronted, of course, by the rural pubs group, the Vintners Federation of Ireland. From an analysis of the number of seven-day liquor licences from the Revenue Commissioners, Digi and VFI highlighted that almost 1,500 pubs, or 17 per cent of the total in the State, have closed since 2005.

Digi/VFI said this trend is “worrying” and needs to be reversed by “supports” such as a cut in excise.

While it is true that some rural publicans are finding it hard, that does not mean that the macro-effect of a decline in the number of pubs is either a worrying trend for the State or should be reversed.

Pubs outside Dublin are closing for a very good reason: there were far too many of them. Put simply, Ireland is over-pubbed.

According to World Health Organisation figures, the consumption of alcohol per head in this State is down by 25 per cent since 2005, the period covered by the Digi/VFI analysis. There have also been widely-documented structural changes in consumer behaviour, such as the shift to more drinking at home.

This has been fuelled by more stringent drink-driving legislation and the growing availability of cheap alcohol in supermarkets that is far more cost effective than a session in the pub.

There was always going to be a shake-out of pub numbers. Excise has absolutely nothing to do with it. The same trend is apparent in other countries.

We have more than twice as many pubs per head of population as Britain, where they consume more alcohol per head than we do, according to the WHO.

And in the 2005 to 2017 timeline used by Digi/VFI to illustrate a 17 per cent fall here, figures from the British Beer and Pub Association show that the number of pubs over there declined by. . . 17 per cent.

Big Drink has previously sought a 15 per cent cut in excise, which would cost taxpayers well north of €200 million. In all likelihood, the bulk of this money would never find its way to pubs at all. Publicans are not liable for excise. The tax falls due to manufacturers, who would most likely use a cut to repair their margins in an environment of declining alcohol margins.

The excise on a pint of Guinness accounts for only about 54 cents of the purchase price, or about 65 cents of a pint of lager. Even if the rate was savaged by the Government – and that will never happen – the scope for any material downstream benefit to publicans and their customers is miniscule.

The best way to help rural publicans is to encourage local transport schemes, cut their oppressive local authority rates, and continue to nurture the tourism boom, and spread it wider. The industry should also help itself by pivoting more to foodservice.

If Big Drink really has the concerns of small publicans at heart, it has a funny way of showing it. Earlier in the summer, Diageo and Heineken, which between them have a stranglehold on the Irish draught beer supply market, wrote separately to pubs informing them they were pushing through identical 2.3 per cent price rises. Cheers?

– Speaking of hard necks, what about Dublin Bus? The company this week said that from September 9th, it will no longer issue redeemable refund receipts for customers who pay in cash. It will be either exact fare only, or Leap Card. Not enough change for your short hop to town? Tough. We’re not giving you back what you’re owed.

The campaign to nudge customers towards cash-free travelling has turned into a shove, by the sounds of it. Some cash fares have risen by almost 70 per cent in the past six years or so, widening the gap with cheaper Leap fares. Infuriatingly for customers, Leap Cards also include a €5 deposit that is inaccessible unless you hand back the card. If you do that, you have to pay the higher cash fares anyway.

In an Orwellian twist, Dublin Bus said the change that it plans to withhold from cash-reliant customers – €600,000 last year – will “go towards continuing to improve our services”, with a portion earmarked for its community fund .

In other words, straight into Dublin Bus’s pocket, to be spent as it sees fit.

– Declan Collier, the former chief executive of Dublin Airport Authority, who latterly ran London City Airport, has landed himself a rather plum role in the British transport establishment.

The UK government has announced that Collier is the “preferred candidate” to take over as the Chair of the Office of Rail and Road, the ultimate regulator of British railways and English roads.

Collier, who is also now a director of Schiphol airport in Amsterdam, will face public scrutiny at a Westminster transport committee later this year. If he passes that ordeal, he will take on the job in January.

The official announcement from the British government declares that Collier “has undertaken no political activity in the last five years”.

Just wait until the Tory administration eats itself – any day now – and Jeremy Corbyn’s Labour enters Downing Street, armed with a plan to nationalise the railways, the byways and anything else that is nailed down and cannot escape.

Then things will get political for Collier. Here’s hoping he has a helmet.

1 Farmer seeks to challenge €3.6bn Intel plan in High Court
2 Fallon & Byrne founders McHugh and Byrne exit group
3 Cosgrave should give his speech to Web Summit’s partners in Saudi Arabia
4 Council tells Johnny Ronan firm to keep the noise down at D4 Embassy venue
5 Who are Ireland’s 17 billionaires?
6 RTÉ’s multiple lobbying meetings with politicians
7 Paschal Donohoe's biggest regret: 'Not managing the National Children’s Hospital better'
8 Election proposals may make the housing crisis worse
9 European shares up as investors bet on economic uplift in 2020
10 Are there annual limits on inheritances or gifts to a child?
Real news has value SUBSCRIBE