Move brings the annual turnover of Dublin-based up to €870m 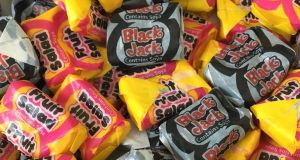 The acquisition of Tangerine Confectionery, which owns old-school Irish sweetshop favourites such as Black Jacks, Fruit Salads, sherbert Dip Dabs and Refreshers, is the 12th buyout in the eight years since the establishment of Valeo.

Dublin-headquartered Valeo Foods Group has completed the acquisition of the British company that makes sherbet Dip Dabs and Black Jack sweets for a price rumoured to be about £100 million (€112 million).

The acquisition of Tangerine Confectionery, which also owns old-school Irish sweetshop favourites such as Fruit Salads and Refreshers, is the 12th buyout in the eight years since Valeo was established.

The deal will bring the Valeo group’s annual turnover up to about €870 million, with 3,000 staff at facilities across UK and farther afield in Europe, and a portfolio of about 60 brands.

It is also understood that Valeo, whose non-confectionery products include Chef sauces and Odlums flour, also recently completed the acquisition of another small Irish confectioner, Oatfield, from Brendan Roantree’s Zed Candy.

As part of a major push by Valeo into the European confectionery market, the Tangerine deal follows similar buyouts late last year of Big Bear Confectionery in the UK and Candy Plus in the Czech Republic.

“We are very excited about the acquisition of Tangerine, which is in line with our strategic focus,” said Seamus Kearney, the chief executive of Valeo, who previously worked at Aer Lingus.

“We look forward to adding Tangerine’s iconic brands to our growing portfolio of category leaders.”