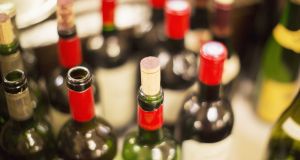 Irish consumers pay excise of €3.19 on a standard bottle of wine and €6.37 on sparkling wine.

Irish consumers downed a record 9.1 million cases of wine last year, despite complaints from the trade that the excise duty on wine is too high.

The Irish Wine Association’s latest annual report noted that while alcohol consumption here continues to fall, wine sales are the exception, rising 0.5 per cent last year. This is despite the fact that Irish consumers continued to pay the highest rate of excise duty on wine in the EU.

The report linked the growth in wine consumption to increased levels of disposable income. While beer remains the most popular alcoholic beverage with 45 per cent of the Irish market, wine is a firm second favourite, accounting for nearly 28 per cent of all alcohol sales.

White wine was the most popular wine variant in Ireland, with a 50 per cent share of the market while red wine consumption fell by 2 per cent, falling from a 47 per cent share to 45 per cent.

Irish consumers also maintained a preference for new world wines over their old world counterparts with wines sourced from Chile and Australia holding dominant market shares at 27 per cent and 17 per cent respectively.

French and Spanish wines had a market share of about 12 per cent each, while Italian wines accounted for just less than 10 per cent of the market.

The report said the continued growth in the economy was favourable for the wine industry, but noted that there are a number of challenges ahead including a possible excise increase in the budget and the Public Health (Alcohol) Bill.

The proposed legislation seeks to impose mandatory cancer-warning labels on all alcohol products sold in the Republic.

“The legislation will mean that all Irish-bound wine will have to be labelled differently and stored separately in warehouses across the world,” the association warned. “This will add to the business costs for wine importers which might result in higher prices for the consumer.”

The report also noted Irish consumers continued to pay the highest rate of excise duty on wine in the EU.

Currently consumers pay an excise rate of €3.19 on a standard bottle of wine while the second-highest rate in the EU is in Finland where consumers pay €2.54 per bottle.

For sparkling wine, such as Champagne, Irish consumers pay €6.37 excise per bottle while the UK has the second most expensive rate of €2.99 per bottle.

The report also noted that of the 28 EU member states, 14 charge no excise duty on wine.

Last year, the sector generated €382 million in excise for the exchequer, an increase of €2 million on the previous year.

“Today, Irish consumers are more sophisticated when it comes to food and they are blessed with an array of some of the world’s finest wines, which are ideal for food pairing,” Jim Bradley, chairman of the Irish Wine Association, said.

“We saw wine consumption rise marginally in 2017 and the continued growth in the wider economy indicates that things remain favourable,” he said.

“However, there are a number of challenges on the horizon, including a potential excise increase in the budget,” he said. “Irish consumers are already hit with the highest rate of excise on still wine in the EU. The excise hit for sparkling wine is doubled for consumers for no reasonable rational basis. This is effectively a tax on our celebrations,” he said.