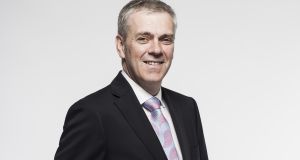 Brian McErlain has agreed to stay on as managing directorof the bakery.

An award-winning Co Derry bakery company, which has been owned by the same family for 50 years, has been sold to a Northern Ireland businessman as part of an administration deal that will save 250 jobs.

McErlain’s Bakery in Magherafelt has been purchased by Paul Allen after it was forced to appoint adminsitrators Andrew Dolliver and Luke Charleton of EY on Tuesday due to “trading difficulties”. Mr Allen is the chief executive of the Northern Ireland-based Tayto Group, a separate entity to the Tayto business in the Republic.

The bakery company produces the Genesis Crafty range, a familiar sight on supermarket shelves in the Republic and a wide range of goods including private label cakes and breads for clients including Marks and Spencer, Waitrose and Tesco.

The company’s latest abbreviated set of accounts for the 12 months to October 2016 showed a turnover of more than £16.1 million (€18 million) and pre-tax profits of just over £480,000. A note on the accounts detailed that McErlain’s total creditors’ liabilities at the time were more than £4.4 million.

The bakery was set up in 1968 by Joe and Roberta McErlain in their family kitchen in Magherafelt but it was their six sons, all bakers, who took over the business and built and continually expanded the company that today employs 250 people.

Brian McErlain, who has agreed to stay on as managing director, said it was an emotional time for his family to hand over the reins of the business.

“This is obviously a time of mixed emotions; sadness that it is now a different family who owns the business but hope for the future and the growth of the Genesis Crafty brand.

“Paul Allen’s ability is very well respected in the business community, not just in Northern Ireland but further afield and I believe that his involvement will be a real benefit to the company. I’d like to pay tribute to all our staff, customers and suppliers, who have been through some difficult times with us and whose support we have really appreciated,” he said.

Mr Allen will remain in his current role as chief executive of Tandragee-based Tayto.

“This is a private investment by me and my family. The McErlain family have built a great business, with excellent products, which have national markets. I’m hoping that in my non-executive role with the company, I will be able to use my experience in the industry to help guide the growth of both the Genesis Crafty brand and the overall business.

“I’m delighted that the jobs at the factory have been secured and that Brian McErlain will be staying on as MD. I see this as a very sound business with great potential,” Mr Allen said.