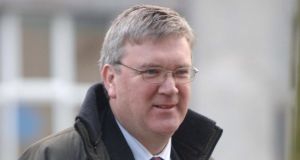 Pat McDonagh: highly unlikely to ever open any Supermac’s outlets on the continent. Photograph: Joe O’Shaughnessy

Spring hasn’t yet properly started and the award for Marketer of the Year is surely already settled. They may as well just hand the gong over now to Pat McDonagh, the wonderfully mischievous founder of Supermac’s.

McDonagh was all over the media this week playing his folksy David to McDonald’s heartless Goliath, after the US fast food giant lobbed in a 41-page objection against Supermac’s application to register its trademark across the European Union.

In fact, McDonald’s first lobbed in a 59-page objection to the EU against Supermac’s more than two months ago. It was reported in a couple of papers at the time but the story never really took off in the pre-Christmas bustle, unlike this week’s reheat. Fast food, slow news week.

McDonagh loves to troll the US fast-food giant.

He told me this week that, despite hinting otherwise in a press release on Tuesday, he has no intention of opening outlets across the Atlantic on McDonald’s home turf. They’d only combust over at Golden Arches’ HQ if he tried that.

Yet last October, Supermac’s took out ads in New York’s Times Square. Never mind that its closest outlet is almost 3,000 miles away. Cute as he is, he clearly did it just to wind up McDonald’s and get some free publicity. It worked a treat, and you’re reading some of the proof.

I’d bet my bottom euro it is the same story with Supermac’s EU-wide trademark application. McDonagh is highly unlikely to ever open any Supermac’s outlets on the continent. They don’t go much for curry chips with cheese or snack boxes in culinary hotspots such as Paris or Barcelona.

The EU trademark would, of course, cover Supermac’s if it were to open outlets in Britain. McDonagh told me he hopes to open two outlets in London before the end of the year.

So why didn’t he just register the name with the British authorities? He already operates a few outlets in Northern Ireland, which would probably fortify him against any whiney guff from McDonald’s in the UK. If he isn’t allowed open in London under the Supermac’s name, McDonagh says, he will do it under a different moniker.