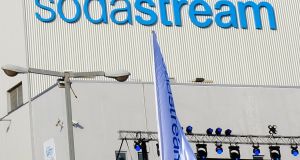 PepsiCo is to buy carbonated drink-machine maker SodaStream for $3.2 billion as it battles Coca-Cola for an edge in the health-conscious beverage market. Photograph: Jim Hollander/EPA

PepsiCo will buy carbonated drink-machine maker SodaStream for $3.2 billion as it battles Coca-Cola for an edge in the health-conscious beverage market.

Founded in Britain in 1903, SodaStream was a coveted device in British kitchens in the 1970s and 80s, allowing people to create fizzy drinks by adding flavoured syrups to carbonated tap water, but its popularity faded as bottled soft drinks became cheaper.

The Israel-based company now markets itself as a sparkling water maker to appeal to younger and more health- and environmentally-conscious consumers, who do not drink much sugary soft drinks.

“With sugary carbonates and juices struggling and no turnaround in sight, mitigating the losses through newer and healthier products will be essential for PepsiCo,” said Euromonitor International analyst Matthew Barry.

The deal announced on Monday may be the last for PepsiCo chief executive Indra Nooyi, who hands over to Ramon Laguarta later this year.

SodaStream’s US-listed shares were up 10.5 per cent in pre-market trading.

PepsiCo said SodaStream complements its water business, which includes Aquafina and smaller brands Bubly and Lifewtr. The company is also experimenting with other non-bottled drinks, including Drinkfinity, which is sold in pods.

PepsiCo said the transaction, unanimously approved by the boards of both firms, was expected to close by January 2019. It said the purchase was another step in its bid to “promoting health and wellness through environmentally friendly, cost-effective and fun-to-use beverage solutions”.

1 Boris Johnson's new immigration regime will damage much more than industry
2 Bank leaked my loan request to family who tried to rip me off
3 Mastercard to create 1,200 new jobs by expanding base in Dublin
4 Billionaire Zara founder and German funds vie for prime Dublin offices
5 Garda mobile contract win causes concern over Eir’s use of Huawei kit
6 Varadkar resigns amid warning impasse will hit the economy
7 A maverick taking on the Irish whiskey establishment
8 How can I view my dead brother’s will if I’m not the executor?
9 Nineteen staff made redundant by Nama share €1m
10 AIB lines up former HSBC executive McDonagh as chairman
Real news has value SUBSCRIBE