Last orders: Number of pubs in the Republic continues to drop

Bar revival in Dublin is not enough to halt falling figures 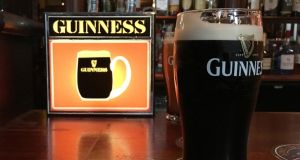 The number of pubs in the Republic has fallen by more than 17 per cent over the 12 years to last year, although there has been a revival in Dublin in the past six years with an additional 32 bars opening for business.

New figures from the Drinks Industry Group of Ireland (DIGI) show that there were 1,477 fewer pubs in operation here last year when compared with 2005.

The decline in rural pub numbers continues unabated while in Dublin there has been a 4.3 per cent rise in bars compared with 2012, when the number of pubs in the capital hit a low.

According to the data, every county in the State has fewer pubs than in 2005. The decline is most pronounced in Co Cork with the number of bars falling by 25 per cent, from 1,221 to 915.

Overall, there were 7,140 pubs nationwide last year, compared with 8,617 in 2005. During the same period the number of off-licences increased by 11.6 per cent while wine-only bars and restaurants increased by 3.1 per cent.

The figures from DIGI are based on an analysis of the liquor licence statistics published by the Revenue Commissioners.

Rural counties recorded the most significant decline in pubs with an 18.7 percent drop in the number of bars outside of the capital since 2005. At the end of last year there were 6,367 pubs in operation outside of Dublin, compared with 7,931 in 2005.

Wexford, Meath and Dublin are the counties that recorded the smallest declines in licences from 2005 to 2017.

“While it is encouraging to see some counties begin their recovery to pre-recession levels of economic activity, the fact remains that every county in Ireland had fewer pubs last year than in 2005,” Vintners’ Federation chief executive Pádraig Cribben said.

The DIGI has called on the Government to provide more supports for rural pubs, with Mr Cribben describing the latest statistics as “worrying”.

The lobby group urged the Government to reduce Ireland’s high rate of excise tax as a way to promote growth in the drinks and hospitality sector, and to safeguard jobs.

According to the group, more than 90,000 jobs across the country are dependent on the drinks industry.

Mr Cribben said publicans have taken steps themselves to address a decline in pub attendance levels with 73 per cent of those surveyed by the organisation saying they had refurbished their premises over the past three years.

In addition, close to half of publicans had introduced better entertainment options, while 41 per cent had beefed up their food offerings.

1 Who are Ireland’s 17 billionaires?
2 State subsidises public sector retirees to cover gap until State pension
3 My father in a nursing home wants to gift me his house
4 Richer countries must do more to tackle climate change, Thunberg tells Davos
5 Health insurance: Switch often for your financial wellbeing
6 Nama lends Cosgraves €15m to fund huge apartment development
7 Builders completed 21,500 homes in State during 2019
8 Are there annual limits on inheritances or gifts to a child?
9 Irish whiskey sales slow in US but distillery visitors top 1m locally
10 Cubic Telecom raises more than €11 million in funding
Real news has value SUBSCRIBE