What’s on, where to watch, where to go – your guide to the weekend’s sport 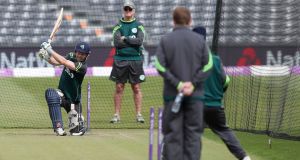 To choose from this weekend we have Pro12 action, the UBL final, full programmes in the Premier League and Airtricity League, the start of the GAA championship, a historic one day series between Ireland and England, a new format of golf on the European Tour, the start of the Giro d’Italia and some quality flat racing.

Cricket: Ireland get their two-match one day series against England underway in Bristol. With the big decision on whether or not Ireland can apply for test status due next month, this could be the first, and last, time they visit England for a series as an associate nation. The live coverage gets underway at 10.30am on Sky Sports 2 with the first ball set for 11am.

Cycling: It’s a big weekend in the cycling world as the 100th edition of the Giro d’Italia gets underway. The first stage sees the riders go from Alghero to Olbia in Sardinia along the northern coast of the island. (Eurosport 1, 11.45am).

Racing: With the good weather set to stick around for a while more it’s certainly worth getting out to watch some racing and, on Friday evening, you can do so in Cork. The first race gets underway 4.35pm.

There is also action at Downpatrick with the first race set for 5.15pm.

Football: After seemingly abandoning their Friday Night Football coverage, Sky Sports will put on some sort of a revivla in the form of the big London derby between West Ham and Spurs at the Olympic Stadium. A win for Mauricio Pochettino’s side would see them move to within a point of leaders Chelsea before they play on Monday night (Sky Sports 1, 7pm).

However, if you’d prefer to get out and see a game live there are five Airtricity League fixtures for you to choose from. At 7.45pm Bray take on St Pat’s, Cork welcome Finn Harps, Derry play Bohs and Drogheda meet Galway. At 8pm there’s the tasty clash of Shamrock Rovers and Dundalk.

Golf: With Quail Hollow gearing up to host the USPGA Championship in August, the Wells Fargo Championship has been moved forward in the calendar and also found a new home at Eagle Point in Wilmington, North Carolina. World number one Dustin Johnson makes his return to action while Shane Lowry, Graeme McDowell and Seamus Power make up the Irish contingent (Sky Sports 4, 8pm).

Football: The lunchtime Premier League kick off sees Manchester City welcome Crystal Palace to the Etihad in what is a must win game as they chase a top four place (Sky Sports 1, 11.30am).

And finally, in the evening kick off Everton visit the Liberty Stadium to meet Swansea (BT Sport, 5pm).

Domestically, Sligo welcome Limerick to the Showgrounds with a 7.45pm kick off in that one.

At 10.20pm on BBC 1 you can catch highlights of all of the day’s Premier League action on Match of the Day.

Cycling: The second stage of the Giro takes the riders from Olbia to Tortoli, through the middle of Sardinia (Eurosport 1, midday).

Golf: A new age dawns on the European Tour with the GolfSixes event at the Centenary Club in St Albans. Players will make up 16 teams of two, representing their countries in six-hole greensomes matchplay with the added bells and whistles of fireworks, music and all of those other elements that, it is hoped, will make golf appeal more to the masses. It wioll certainly be interesting to see how it goes (Sky Sports 4, 12.30pm).

If you prefer your golf to be regulation, 72-hole strokeplay

On the domestic front there is action at Cork – where the first race is off at 1.30pm – and Wexford where the action gets underway at 2.25pm.

Rugby: There are two Irish derbies in the Pro12 to look forward to on Saturday but neither carry much weight with nothing more than final league places to be decided.

Munster and Leinster have already secured their spots in the semi-finals with Scarlets and Ospreys the opponents, although who will play who will depend on the meeting between the two Welsh sides.

However, Munster’s clash with Connacht does carry some weight in that Conor Murray may return to action ahead of the Lions tour (TG4, 4.55pm).

Barring a miracle, Ulster won’t make it into the top four and they look to be resigned to that already, having rested their three Lions squad members for the visit of Leinster to Ravenhill (BBC2, 5.10pm).

Cricket: It’s the second and final one day international of the two-match series between England and Ireland and it represents another historic milestone as the two sides meet at Lord’s, the home of cricket, for the first ever time (Sky Sports 2, 10.30am).

Golf: GolfSixes comes to a conclusion on Sunday when a winner will be crowned at St Albans (Sky Sports 4, midday).

A winner will also be crowned at Eagle Point with the final round at the Wells Fargo before the tour moves on to next week’s Players Championship (Sky Sports 4, 6pm).

Cycling: The third stage of the Giro should, on paper, be the easiest yet for the riders with 100km on virtually flat roads from Tortoli to Cagliari, with some stunning views along the way as they cruise down the coastline (Eurosport 1, 12.15pm).

Racing: As the summer continues to creep in so does the flat racing season and Leopardstown hosts its first flat meeting on Sunday with the action underway at 1.10pm.

GAA: It’s not the busiest of weekends for GAA, although on Sunday the 2017 Football Championship gets underway.

Sligo face New York in the Connacht preliminary round at Gaelic Park. Sligo come into the game with some injury problems but will still be strong favourites, that match throws in at 8.15pm Irish time and is live on RTE Radio One.

Also on Sunday, Cork take on Donegal in the Division One Ladies football league decider. That’s underway in Parnell Park at 4pm. The rebelettes are looking to win their fifth Division One title in a row and their 11th since 2004. Donegal however, last year’s Division Two champions, are playing in their first Division One decider (TG4, 1.55pm).

Football: There are two Premier League clashes to fill the football void on Sunday with Liverpool kicking things off when they welcome Southampton to Anfield (Sky Sports 1, 12.30pm).

Immediately following that is the always huge clash between Arsenal and Manchester United which kicks off at 4pm.

Rugby: The Ulster Bank League Division 1A reaches its conclusion at the Aviva Stadium on Sunday when Cork Constitution will look to reap revenge for last year’s final defeat to Clontarf against the same opponents. The north Dublin club have looked as strong as ever this year but Con will be determined to turn last year’s defeat on its head (RTÉ2, 2.15pm).

1 Ireland, France or England? Who needs what to win the 2020 Six Nations
2 America at Large: Golfers guilty of legitimising Trump’s toxic regime
3 ‘This is not a personality contest’ - Jack Nicklaus endorses Donald Trump
4 Solskjær’s stock is on the rise again after clever squad rotation
5 Gael Fickou shifted to the wing as France name their XV
Real news has value SUBSCRIBE
Here is your handy guide to sport on television this week