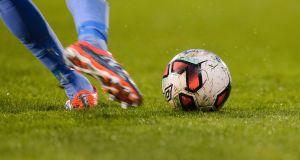 The Republic of Ireland U-17s have no more room for error at the European Champiionships. Photograph: Tom Beary/Inpho

The Republic of Ireland have it all to do if they’re to remain in the Under-17 European Championships beyond the group stage after they lost their opener to a late Serbia goal in Kostrena on Thursday.

Zeljko Gavric’s looping header eight minutes from the end earned the Serbs an unlikely win, given they were fortunate not to concede a penalty and also had the post to thank for saving them.

Both of those openings for Ireland were mustered by interval substitute Aaron Connolly, the Brighton and Hove Albion frontman who came into the tournament carrying an injury but was introduced at the break.

With the first game of the group earlier in the day going as expected, top seeds Germany hammering Bosnia-Herzegovina, Ireland knew victory would put them in command for one of the qualification spots from the pool into the quarter-finals.

Instead, this defeat means they will probably have to win both their remaining matches, starting with Sunday’s meeting with the Bosnians.

Colin O’Brien side were slow getting to the grips with the game but gradually improved to dominate possession for large spells and create some clearcut chances.

Goalkeeper Brian Maher was in the main left inactive once he pawed away Dimitrije Kamenovic’s dangerous inswinging free-kick from the left which was heading for the far corner.

Adam Idah, leading the Irish attack, was twice given sights on goal inside the opening ten minutes, firstly dragging his shot wide and then seeing his goalbound effort from close-range blocked.

Rowan Roache was also unlucky not to hand Ireland the lead in the first half, only a fingertip save denying the Blackpool youngster’s powerful free-kick from 30 yards.

Still, Ireland could easily have gone behind just past the half hour when Kamenovic, was allowed ghost in behind the Irish defence and send a ball across the six-yard box which Mihajlo Vidosavljevic could only poke wide with his outstretched leg.

Connolly’s arrival for the second half sparked an immediate upturn in Ireland’s attacking threat and one of his trademark burst into the box from the left wing was halted by Aleksandar Kostic’s tackle. Greek referee Anastasios Papapetrou waved away claims for a penalty, and didn’t whistle either for a corner.

The Galway teen then came agonisingly close to finding a breakthrough on 67 minutes with a right-foot shot which beat the goalkeeper only to clip the outside of the upright.

Although Ireland looked comfortable, they gifted Serbia a good opening with 10 minutes left when goalkeeper Maher picked up a backpass from Luke Nolan, thinking it had deflected off an opponent. While they survived the resultant free-kick by Gavric which deflected wide, Ireland stood static moments later from the corner as the Red Star Belgrade midfielder was first to connect and find the top corner.

Time and energy ran out for Ireland in their attempts to salvage a draw. Any margin of error which existed in the group is now gone.