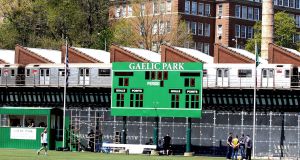 Justin O’Halloran has named the New York panel for Sunday’s opening match of the 2017 football championship, the Connacht first round against Sligo in Gaelic Park.

It features nine of the players who played against Roscommon last year and nearly defeated them, going down in the end to a late goal and one-point defeat.

Also included are some well-known names from home: Dublin All Star hurler Danny Sutcliffe plus Mayo All-Ireland finalist Tom Cunniffe as well as Wicklow forward Conor McGraynor plus familiar faces from previous years, such as captain Gerard McCartan from Down and Donegal’s Ross Wherity.

Goalkeeper Vinny Cadden will be facing his own county on Sunday.

Since first participating in the Connacht championship in 1999, New York have yet to win a fixture but there are rising hopes that after last year’s close call, this could be the breakthrough against an under-strength Sligo side.