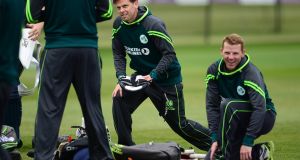 Ireland’s Ed Joyce in training ahead of the One-Day International with England in Bristol. Photograph: Harry Trump/Getty Images 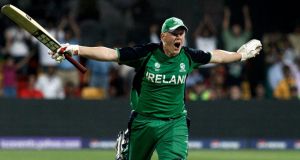 A harsh six weeks in India hunted and haunted by a teenage Afghanistan leg-spinner left Ireland a little rattled as they ceded top dog status at Associate level to the new rising power in the game.

Watching from afar, it might have been hard for many Irish supporters to gauge just how well 18-year-old Rashid Khan was bowling, but figures rarely lie, especially over an extended period, and in all three formats of the game. Ireland’s finest ever batsman, Ed Joyce, already places Khan in the toughest three bowlers he has ever faced, with his performances in the Indian Premier League (IPL) with Hyderabad backing that up.

Ireland have a chance to put the Indian trip behind them over the coming month, with six One-Day Internationals, two each against England, New Zealand and Bangladesh. The Bristol County Ground is the first stop on Friday morning ahead of the trip to London for Sunday’s much-anticipated stepping out at Lord’s.

England have let Ben Stokes, Jos Buttler and Chris Woakes remain with their IPL franchises but former Ireland batsman Eoin Morgan has returned to skipper a squad that includes 12 of the 15 -man squad for next month’s Champions Trophy in England.

Ireland are missing opening bowler Boyd Rankin through injury but Kevin O’Brien has returned to action and the all-rounder will be looking forward to taking advantage of the short straight boundaries on a ground where he played for a summer.

The links with Gloucestershire don’t end there as Ireland skipper William Porterfield cut his professional cricketing teeth on the ground, while Ireland coach John Bracewell played an important role at Gloucestershire over two spells as coach. A capacity crowd of 7,000 is expected to turn out to greet them on Friday.

Bracewell knows his side face a tough task over the next three days, with England full of big hitters all through their order. Jonny Bairstow put aside his disappointment at not being given the wicketkeeping gloves against Ireland by hitting a personal best of 174 off just 113 balls in Yorkshire’s one-day win over Durham on Wednesday and will bat at number five, with Sam Billings behind the stumps.

O’Brien, whose 50-ball century set up Ireland’s famous 2011 World Cup win over England, believes the current England side are on another level.

“England are one of the best One-Day International teams in the world at the moment. It’s a team packed with a lot of firepower but hopefully we can counteract that on the day with our smarts and the execution of our skills. It’s going to be two difficult games but two great games too,” said O’Brien.

O’Brien, Porterfield and Joyce have all pointed to the benefits accruing from the six-week stay in India, including working over an extended spell with coach Bracewell for the first time, while also allowing some of the young players develop within the squad.

Joyce is aware that there will be some hard days ahead over the coming month and believes that Ireland must focus on performances rather than results and also look to get back to the basics that helped put Ireland on top of the second tier of cricketing nations.

“Our biggest plan against three teams that are clearly more favourites in these games than we are, is to put in good performances,” said Joyce. “That’s our biggest thing, good performances, real get up and go, [be a] good fielding team, which is what we always based our team around. And just to get back to what we have done well over the last decade. And then if the results go our way in some of those games, fantastic.”

It is a realistic way at looking at things, but Ireland are always up for games against England and regularly raise their game for the big occasions.

But then again, England’s players will be out to make a mark ahead of next month’s international one-day jamboree, with Morgan quick to state his side’s intentions for Bristol and Lord’s.

“The strength of the side we’re putting out reflects that, and it’s a really important summer for us – so we’re taking it as seriously as any other fixture,” said Morgan, who ended his press conference by confirming that he would not be following the route taken by Joyce and returning to play for Ireland later in his career.

Some might say that sums up Ireland’s hopes in the coming days. They said that in 2011 too.