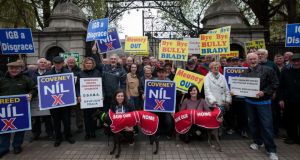 Sisters Janine and Lesley Barber protest with others outside Leinster House on Thursday over the sale of Harold’s Cross Stadium. Photograph: Gareth Chaney/Collins

The Irish Greyhound Board (IGB) has said it did not make commercial sense to keep Harold’s Cross Stadium open in Dublin, despite it making a profit of €280,000 in 2015.

Phil Meaney, chairman of the IGB, told the Dáil Public Accounts Committee (PAC) “the market isn’t big enough for two tracks on similar nights”, in a reference to the city’s other greyhound venue at Shelbourne Park.

“The decision to sell Harold’s Cross is not solely predicated on its potential value to the IGB or its contribution to the resolution of the debt issue, but is also based on the fact that it is two miles from Shelbourne Park stadium which is twice its size and operates for a limited period every week, as indeed does Harold’s Cross. It doesn’t make commercial sense,” he said.

Mr Meaney said the “effective closure” of Shelbourne Park over the past 10 weeks by people opposed to the closure of Harold’s Cross “is clearly not sustainable”.

The Dublin Greyhound Owners and Breeders Federation called on its members to withdraw dogs from races at Shelbourne Park following the closure of Harold’s Cross in February and no racing is currently taking place.

“In addition to the €300,000 losses which have been incurred by IGB, the disruption of racing has cost owners and trainers some €250,000 in prize money. IGB cannot haemorrhage money in this way and unless there is a resolution – and I have to make this clear – then the endgame is the cessation of all racing nationally,” Mr Meaney said.

The IGB, also known as Bord na gCon, is the semi-State body responsible for the control and development of the greyhound industry in Ireland. It accepted an offer this week from the Department of Education for the Harold’s Cross stadium.

Seán Brady, interim chief executive officer of the IGB, said it could not disclose the price received for Harold’s Cross but its property advisers Savills said it was “an acceptable price”.

Mr Brady said he understood the department’s intention is to build “a school or schools on the site”.

Members of Save Harold’s Cross Greyhound Stadium protested outside Leinster House during the PAC meeting.

Mr Brady said there were “things the IGB could have done better” in relation to the closure of Harold’s Cross. “I regret absolutely and IGB regrets the inconvenience to many genuine greyhound people in Dublin . . . We accept that people who lived and were part of the infrastructure of Harold’s Cross were discommoded and we’re sorry about that.

“One thing we would have definitely done differently was we would have had some involvement by the board of Harold’s Cross in the decision-making.”

The IGB has a debt of more than €20 million, which it says stems from the building of Limerick greyhound stadium in 2011 as well as legal fees from a previous High Court action.

Mr Meaney said the building of Limerick stadium “put huge financial pressure on the organisation” adding that the closure of Harold’s Cross was “the correct decision”.

“Decisions were made [by the board] when the economy was at its highest, the economy collapsed and certainly, with the benefit of hindsight, you would question some of the decisions.”

The board also defended its wage costs with 11 staff accounting for €1.2 million of the total bill. It said it needed “talented people” and “good leadership” to ensure its survival.

The IGB will aappear before the PAC again on May 18th.