Rovers aim to put frustration behind them against Dundalk 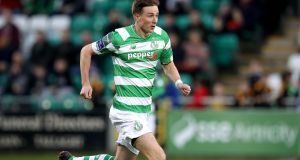 Shamrock Rovers captain Ronan Finn has said he understands fans’ disappointment with the club’s form ahead of their clash with his former club Dundalk. Photograph: Ryan Byrne/Inpho

After a first series of games in which they have struggled to impress, Ronan Finn understands the frustration of supporters as Shamrock Rovers look to finally spark their season to life against champions Dundalk at Tallaght Stadium tonight.

Stephen Bradley’s Rovers have lost six of their 11 games so far, finding it hard to consistently impose themselves on opponents.

“They’re right, they should be frustrated,” said captain Finn of fans’ disgruntlement at the team’s stop-start displays to date.

“You watch us and we can play the ball well for the first 45 minutes, go 1-0 up, 2-0 up and then you are rubbing you hands saying we’ll kick on and get three or four.

And Finn accepts it is him and his team-mates who are ultimately responsible.

“It comes from the players,” said the 29-year-old midfielder who won the title with Dundalk in each of the last two seasons before moving back to Dublin 24 this winter.

“I take responsibility for that. It’s something that, as players, we’ve got to make sure our standards are maintained.”

After a surprise fourth defeat of the season in Galway last week saw them drift 12 points behind leaders Cork City, Dundalk could also do with finding some consistency. That is something that will only come with continued effort and endurance, insists manager Stephen Kenny.

“We are nothing without hard work,” said Kenny who remains without right back Seán Gannon (knee) and midfielder Robbie Benson (hamstring).

“We must realise the importance of hard work and understand that that has underpinned every part of our success over the past few years. We must roll up our sleeves and work hard for each other. That will give us a platform to utilise our creative instincts.

“We’ve a lot of very creative players in the team. We want them to really express themselves.”

Cork continue without injured defender Alan Bennett and midfielder Garry Buckley as they host suspension and injury-hit Finn Harps at Turner’s Cross looking to make it 12 wins from 12.

“Every week throws up different challenges for us and we’re well aware of what a fantastic job Ollie Horgan has done at Finn Harps over the last few years,” said Cork City manager John Caulfield, wary of Harps’ doggedness which has brought them away wins at St Patrick’s Athletic and Derry City.

“We know they will play on the counterattack and we will have to be at our best to pick up the three points.”