GAA confirms plans for hurling reform in time for next year 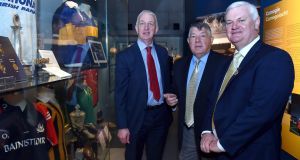 The GAA is hoping to ratify a round-robin reform of the All-Ireland hurling championship in time for the 2018 season. Central Council will in June consider an overhauled fixtures’ calendar, which will reduce the number of weeks allotted to inter-county competition but increase the number of fixtures in order to give more time to the clubs.

This is the first official indication that hurling will be following a similar pathway to football, which in 2018 will have a round-robin format for the last eight counties in the championship. Concerns had been expressed that hurling would suffer from having so few matches in August compared to football.

Association president Aogán Ó Fearghail, speaking at a media conference in the Croke Park Museum on Thursday, said he was hopeful that the new plan would be approved in time for next year’s hurling championship.

“It can of course. We need to do something similar. We have the broad outline of a plan there. Again it will be Central Council that will lead on it. It has to be but myself and the Ard Stiúrthóir have written to our various committees here and shown them a broad outline of a plan for the reform of the hurling championship that would be broadly similar to football; more games at the end stages but again in a tighter period.

“I think it needs to happen because we could never do anything that might damage hurling and there was always the chance that if you had a lot more football it could have that impact.

“So I think we’re going to reform the calendar in a positive way for clubs and there’ll be space for clubs and more exciting competitions in both football and hurling. How Central Council chooses to deal with that is a matter for them and it’s a possibility we could have a special congress and if Central Council agree, then yes”

Parallel to the rising clamour for reformed championship structures has been growing concern about the fractured and chaotic schedules for club players and how the inter-county season has been impacting on that situation. This has given rise to the emergence of the Club Players’ Association, which has been advocating fixed club schedules and a reduced inter-county championship.

The president said that there had been engagement with the CPA, whose concerns he said are shared by the Croke Park administration.

“We showed the CPA and different groups that . . . there are a lot of committees in Croke Park who are looking at it. I have always since I started out wanted Central Council to lead on these processes and they will.

“I said fixtures were a very important issue that I would like to address, yes, and I have always felt you can’t tinker too much around the edges with it. You do need to take it in a staged approach and you need to take Central Council with you. In the past we have had groups and committees reviewing our intercounty competitions and fixtures planning and we got great ideas but very little out of it because Central Council weren’t leading on it.”

In a separate development the CPA released a statement saying that they had had a meeting with senior GAA officials on Wednesday evening to discuss fixtures and consider “detailed research based proposals that we feel offer the GAA the opportunity for progress, based on our analysis of 32 counties”.

Ó Fearghail sidestepped a question whether there was a role for the CPA in championship reform, a topic that had featured in a survey conducted by the organisation and released last week.

“I don’t know. I really don’t know. We have made a substantial change at Congress and we now as a democratic organisation have decided for the next three years we are going to have quite a different – when you think about it, All-Ireland finals are back in August, more games in a lot shorter of a period. We really want to have a situation where we have players playing every Sunday when it’s inter-county and that’s what we’re moving to.”

He was asked about comments by Dublin football manager Jim Gavin on the suitability of inexperienced referees for major matches – expressed in the context of Paddy Neilan’s appointment for the league final between Dublin and Kerry, which was his first Division One match of the season.

“I think the process is always ongoing. How can we ever get new referees if we don’t give them the opportunity? How can a manager ever get new players if he doesn’t bring in a super sub that’s young in the last 10 minutes and maybe score three points in an All-Ireland final [an apparent reference to Dublin’s Cormac Costello, who made just such an intervention in last year’s replay against Mayo].”

The president officially launched the Imreoir to Bainisteoir exhibition at the GAA Museum on Thursday. This honours the achievement of 30 All-Ireland winning players, who went on to manage teams to the same distinction. It will run until May 2018.