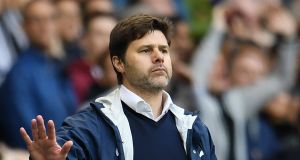 Mauricio Pochettino: “With our signings and our work, we are creating a team that can, when we get the new stadium, be one of the best teams in the world.” Photograph: Andy Rain/EPA

Mauricio Pochettino says the stereotypical view of Daniel Levy is true. The Tottenham Hotspur chairman is hard, ruthless and can be a nightmare to deal with.

But he has also come to see another side to Levy and when the manager describes him variously as “shy, sensitive and funny” it underlines the closeness of their relationship and shines a light on why these are heady days for the club.

Tottenham travel to West Ham tonight seeking the Premier League victory that would increase the pressure on the leaders, Chelsea. But whether or not Spurs win the title, this season will go down as the second successive campaign in which Pochettino’s team have exceeded expectations.

He believes it is time Levy’s work was recognised. With the club’s new 61,000 seat stadium scheduled to open in time for the 2018-19 season, Pochettino feels Tottenham can become “one of the best teams in the world”. He likes to dream big. Levy has helped him to do so.

“Daniel deserves a lot of credit in the three seasons I’ve been here,” Pochettino said. “The support from him is massive. If you have a great chairman, it’s important to recognise that. We are going in the right way.

“The perception of Daniel is real. He is so tough. He is hard. It’s not easy to manage a club of this size and if you are a soft person it would be so difficult. But we spend a lot of time talking and I am happy to see a another side to him. He is very human, he is sensitive. He is so clever and he is funny, too. This is how I know him. He is so shy and he doesn’t like too much to appear in the media. The perceptions are normal but when you see the other side he’s a very close person.

“Daniel is the first person who is creating a massive club for us and the fans because he is thinking, in the next few years, to take the club to the final level. Slaven Bilic said he is calm and concentrating only on Friday’s game after it emerged his future as West Ham United’s manager depends on performances against Spurs and Liverpool in the final two home matches of the season.

“It is not the time to talk about that,” Bilic said. “It is not about individuals, it is about the club. I am calm and totally focused on the game. The only thing I am thinking about is the match against Spurs.”

West Ham have had a troubled first season at their new home and may need at least one win from three games to ensure Premier League safety. Injuries and adapting to the London Stadium have contributed to their lacklustre season, in sharp contrast to last term when they finished seventh.

The team’s woeful displays at home against the leading teams have particularly troubled the club’s hierarchy.

“You don’t need extra motivation when you play against Tottenham. Last season’s game at Upton Park, when we beat them 1-0, was one of the most electric atmospheres. It is a big game for us, a big game for the supporters, it is under the lights, which is always a special one, and we are ready for it.”

Tottenham, four points off the top in second spot after winning nine league games in a row and looking to keep the pressure on Chelsea, have impressed Bilic, who thinks they are “playing the best football” of any team.

“I have nothing but praise for Chelsea, I have great respect for them,” he said. “Don’t get me wrong, Chelsea deserve to be on top, but Spurs are playing maybe the best football.

“Spurs have been in good form for the past couple of months and are playing good. But we have to be positive. We are four games unbeaten and have three cleans sheets as well. Our form has improved and we are positive and optimistic.”

Danny Rose is still not ready to return for Tottenham but is expected to resume full training next week as he continues his recovery from a knee injury. West Ham’s Andy Carroll, who has been absent for three games with a groin strain, will have a fitness test.