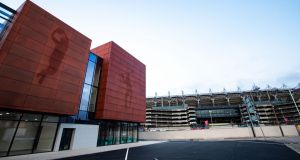 Medical expert says predicating any return to sport after Covid-19 on the discovery of a vaccine could prove “dangerous” and “ridiculous”. Photograph: Inpho

Predicating any return to sport after Covid-19 on the discovery of a vaccine could prove “dangerous” and “ridiculous”, according to Prof Kingston Mills. The professor of experimental immunology and head of the Centre for the Study of Immunology at Trinity Biomedical Sciences Institute in Dublin, explains: “It’s no walk in the park, creating this vaccine, so I think it’s a very dangerous rule or standard, or whatever the word is, to take, to say you’re not going to do anything until there’s a vaccine”. Looking ahead to the Dublin Marathon, he believes runners in general are low-risk, but 25,000 runners at once? “I could envisage a scenario where you had a field of a couple of hundred runners, maybe even set them at intervals, like they do in team time trials in cycling. Say at 20-second intervals, and say if the fastest-ranked runners went off last, it could actually be quite exciting.”

The FAI does not expect there to be supporters at any Nations League games played at the Aviva stadium this autumn and its interim CEO, Gary Owens, believes that the fixture list might yet be revisited so as to reorder the games or even push some of them back into next year in an effort to mitigate the financial impact on the association. “We have had about six Covid-19 projections at this stage,” Owens tells The Irish Times, “but we are now working on the assumption that there will be the games this year but not the fans. That will challenge us.” The prospect of Premier League clubs in England getting the go-ahead to finish the season in their own stadiums has increased after a meeting involving the police, league and UK government officials.

1 In six months we will be in the grip of a 1980s-style recession
2 Luke ‘Ming’ Flanagan bares his bottom half to European Parliament
3 Black Lives Matter protest planned for Dublin is cancelled
4 ‘I saw young girls get kicked, hit, sprayed and dragged off gasping for air’
5 Government finances deteriorate as budget deficit hit €6.1 billion in May
6 With Lincoln looking on, the crowd dropped to their knees as 7pm approached
7 Chartered Land gets 'approval' for Dublin’s tallest tower on Parkgate Street
8 Covid-19: Harris urges people not to think it’s ‘mission accomplished’ ahead of next phase
9 Michael McDowell: Black Americans fear the future and so should we
10 Trinity College Dublin to resume with as much face-to-face teaching as possible
11 Diarmaid Ferriter: 1920 was a year of violence, trauma and terror in Ireland
12 Brothers charged with raping, sexually assaulting their younger brother in 1990s
13 ‘Did I miss anything?’ A modern Rip Van Winkle emerges, blinking, into lockdown
14 Normal People: Full-frontal nudity was not its most radical feature
15 Gardaí move against cyber crime, prostitution gang in Dublin
16 Easing restrictions: What exactly will happen next Monday?
17 ‘Tralee felt friendlier than Killarney. We discovered a different welcome there’
18 Church of England rules Irish inscription on grave stone must have translation
19 Angela Merkel sweeps in to save the euro zone
20 Normal People: The origins of Connell and Marianne
21 Google facing $5bn lawsuit for tracking in ‘private’ mode
22 Sweden should have done more to combat coronavirus, health chief says
23 Aer Lingus wants quarantine period axed to resume flights in July
24 Travellers on halting site ‘thick with rats’ challenge Cork council housing plan
25 Jacob Stockdale gives keyboard warriors the slip in textbook fashion
26 Farmer dies after falling from quad bike in West Cork
27 Michael Harding: How I learned to stop worrying and love my enemy
28 Remote working: Ending the lunacy of pointless commutes
29 Are we there yet? The seven sticking points in government formation talks
30 Róisín Ingle: My body has seized up while in lockdown
31 Co Mayo community grieves for Ben Duffy (5) after Lough Mask tragedy
32 Unemployment rate remains at near record 26.1% in May
33 Double Standards for Men No 253: Lynn Ruane v Paul Mescal
34 Coronavirus: 25% of new cases arising in the community with no known link to other cases
35 Johnson defends coronavirus response as UK’s death toll passes 50,000
36 Dealer group trashes Government plans for petrol ban from 2030
37 Son raring to go after completing military service in Korea
38 More than 200 people contracted Covid-19 while in hospital for other conditions
39 Should my mam wait for house prices to drop before buying?
40 Programme for government must include 'fiscal responsibility' – Varadkar
Real news has value SUBSCRIBE