Runners are low-risk, says a top immunologist, but 25,000 runners? That’s a problem 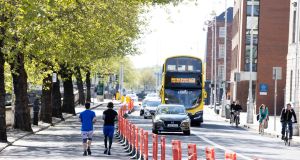 Distance runners moving at any reasonable pace present no significant risk of spreading Covid-19. The problem, according to Prof Kingston Mills, is, say, 25,000 of them setting off at the same time.

Mills comes eminently qualified on both fronts: professor of experimental immunology and head of the Centre for the Study of Immunology at Trinity Biomedical Sciences Institute in Dublin, he’s also run a 2:13:55 marathon and represented Ireland over the classic distance on the world stage.

A national marathon champion in 1986, Mills still maintains an active interest in outdoor exercise – mainly cycling these days after a knee injury curtailed his once-fluid stride – and reckons distance runners are being wrongly singled out even as restrictions are being lifted around Covid-19.

“When you’re actually out on the road or the track running, you’re not much of a risk to anyone else,” says Mills, offering some comfort perhaps to most pedestrians and other passersby.

“The virus is really transmitted by coughing and sneezing, in close proximity, and it really gets blown away if you’re running at any reasonable pace. You’re not going to pass it on to someone else that way. It’s different if you’re sitting on a bus or plane, or somewhere indoors.

“The problem is with mass running events such as the marathon, the congregation at the start, the getting there, all that is certainly an issue. The finish could actually be okay if they’re coming in at different times. Still, that’s why mass participation running is going to be much more difficult to crack as long as Covid-19 is an issue.”

Several big-city marathons, Dublin included, are still pondering their 2020 fate, and whether or not it might be still possible to proceed in the autumn. Dublin Marathon race director Jim Aughney told The Irish Times earlier this week that for now their race, a 25,000-entry sell-out, remains set for October 25th, but a decision on whether to curtail, postpone or possibly cancel is now pending.

“A mass-participation marathon like Dublin would also carry a much higher risk than, say, a championship marathon, where the numbers would be much smaller,” says Mills, who clocked his 2:13:55 – still the 14th fastest on the Irish all-time list – in Berlin in 1986, the year before he ran the World Championship marathon in Rome.

“I could envisage a scenario where you had a field of a couple of hundred runners, maybe even set them at intervals, like they do in team time trials in cycling. Say at 20-second intervals, and say if the fastest-ranked runners went off last, it could actually be quite exciting. You might even see some very good times. That’s just one suggestion.

“But the problem with the mass participation marathon is the sheer numbers. It very much depends where we are in the autumn with this pandemic. It does look now as if things are improving in most European countries, with the exception of a few. The UK still have to get on top of things, and the US too, in my view. It also depends if this is a seasonal infection or not. Influenza can often come and go in bouts. We don’t know if it’s similar with Covid-19, although there are hints that it might be.

“So it’s very hard for anybody, scientific or otherwise, to predict where we’re going to be in the autumn. It could well disappear in the summer, it could just slow, but it might well come back again.

“The other big thing of course is the vaccine, if that can be approved over time. I certainly don’t think we’ll have a vaccine for these autumn marathons. Though we might for the following autumn.

“But if we’re in a situation where we are still practicing social distancing, there is no way to do it. Unless they go with that elite field only, even if the finances are very much dependent on the mass participation.”

On Wednesday morning, World Athletics announced fresh plans for a series of one-day track and field meetings between August and October, including Diamond League events in Monaco, Brussels and Rome. Athletics Ireland are still planning to stage their national championships in August, and, with or without any loosening of the two-metre social distancing, Mills sounds hopeful.

“If you take the sprint events, athletes in their own lane, that wouldn’t be a great risk, nor the 1,500m or 800m perhaps, as I don’t see outdoor running, say an eight-person race, as being a huge risk either. Again, maybe in the congregating beforehand, but once they’re running out on the track it’s not a huge risk.

“It’s different with contact sports. Take for example the front rows in a scrum. If one of those has the virus, the whole scrum is going to have it. Whereas in running, as long as you don’t congregate at the beginning, there is no great risk with two runners running side by side.

“It’s all about common sense. When you cough or sneeze, you omit an aerosol droplet that projects a certain distance. There’s nothing magic about two metres. Or even one metre. The closer you are, the more likely you will pick it up.

“What I see talked about with team sports, soccer and rugby, is to test everybody. The PCR [polymerase chain reaction] test, for the virus, which is what everyone is doing right now, and also the test for the antibody, which means they’ve had the virus and recovered. If you can test everyone, test them twice, the measures the big football teams are considering already, to get them back playing, that’s around 100 people, easy to do. They can also afford to have private travel, as long they’re playing the games somewhere.

“But again, say 25,000 runners in Dublin, how would you test all of them? And what about people who are travelling into Ireland? So I really think we have to be over the pandemic before I can see a mass participation marathon happening. Smaller ones, yes, but not 25,000.

“Maybe, come the autumn, things will have changed significantly enough, and I think the Government have laid down very clear guidelines, what needs to happen by August. But things might actually get better before that. People like to have some assurances, when realistically we just don’t know. I am optimistic after the last few weeks, but that’s all because everyone beyond the essential workers have been locked in. We can’t do that forever. There are some worrying signs from Germany and South Korea, who might have opened too quickly, that it might be resurging there.”

Other mass spectator events, such as Tour de France, present a different challenge.

“The Tour de France is certainly less risky than mass participation marathons, with the entourage, it could be 300 out on the road, and they would be spread out quite often. Controlling the crowd is the issue, when the race passes people’s doorsteps. But again, when you see them lifting restrictions in Spain and Italy, perhaps by the end of August you might be in that position where general movement of people is no longer curtailed.

“We’re on the right trajectory, but we’re not over it either, especially if there is any rebound. But go out and run. You’re not a risk, that’s my view. It’s just different if you’re running with 25,000 others.”

Should we wait for a vaccine before a return to sport?

Predicating any return to sport after Covid-19 on the discovery of a vaccine could prove “dangerous” and “ridiculous”, according to Prof Mills.

A survey by the Club Players’ Association (CPA) published on Tuesday revealed that more than 40 per cent were either uncertain about (21 per cent) or opposed to (22 per cent) a return to GAA club training and matches before a vaccine makes the activities safe.

The president of the Japan Medical Association, Dr Yoshitake Yokokura, also said last month a Tokyo Olympics in 2021 would also be “exceedingly difficult” without a vaccine.

“That’s a very, very risky proposition,” says Mills. “The chances of us having an effective vaccine within a year is maybe 20 or 30 per cent. It could be a lot longer.

“If you look at other infections like HIV, 20 years on, we still don’t have any vaccine that works against it. With malaria we’ve a very iffy and poor-quality vaccine and we’ve been working on it for 20 years.

“It’s no walk in the park, creating this vaccine, so I think it’s a very dangerous rule or standard, or whatever the word is, to take, to say you’re not going to do anything until there’s a vaccine.

“The whole pandemic might simply disappear, and some people are waiting on a vaccine before they resume sport. That’s ridiculous. You make the decision on whether or not we still have a pandemic, not predicated on a vaccine. Same with the Olympics taking place next year: that shouldn’t be predicated on whether or not we have a vaccine. It could be the noose they swing themselves with, so I wouldn’t be making statements like that at all. It could make it a lot more difficult to make that return possible.”