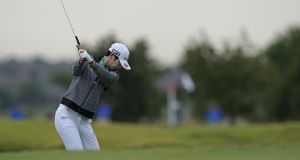 Professional golf has been suspended almost everywhere around the world since March with the first three men’s Major championships rescheduled for later in the year while the British Open has been cancelled altogether. However, the women’s circuit gets back underway this week in South Korea with the KLPGA Championship at Lakewood Country Club in Yangju. Here is all you need to know.

Did I hear there’s a real professional tournament somewhere this week?

Yes. You might know about the charity shootout in Florida where Rory McIlroy and Dustin Johnson will meet Rickie Fowler and Matt Wolff, but there’s an actual tournament taking place in South Korea where three of the top-10 ranked players in the world – all Koreans incidentally – are playing as the Korean LPGA Tour reboots after being in abeyance due to the coronoavirus.

Will there be any spectators?

Unfortunately not. It’s a sign of the times we are in that the KLPGA Tour have decided to restart the season behind closed doors, which the PGA Tour in the United States has also indicated it will adopt on its resumption.

How come Korea is ready to hold a tournament ahead of everyone else?

This is mainly due to the Seoul government having implemented targeted testing and contact tracing measures that helped to significantly reduce the spread of the virus. Players will have their temperatures taken daily before entering the course but won’t be required to undergo virus testing before competing. Sanitisers have been installed on the practice range and players are asked to follow physical distancing guidelines.

So, no high-fiving or handshakes?

No, none of that.

Is this just for optics or a sign of better days ahead?

Hopefully it will be the start of competitive golf again. Sung Hyun Park, the world number three, is in the field along with US Women’s Open champion Jeongeun Lee6 and Sei Young Kim. The KLPGA Championship has a prize fund of $2.45 million with a 150 player field, so it is a proper tournament and one which other tours will be keeping a close eye on.

Any plans yet for any other tours to restart their seasons?

Well, the PGA Tour is edging closer to a return. The US circuit is scheduled to get under way again with the Charles Schwab Challenge at Colonial on June 11th-14th and, like the KLPGA Championship, will be staged behind closed doors with no spectators. The PGA Tour’s roadmap to getting up and running again initially focuses on four tournaments – also featuring the RBC Heritage, the Travelers Championship and the Rocket Mortgages Championship along with the Colonial – before allowing a limited number of spectators attend the John Deere Classic in July. The LPGA Tour has aimed for a mid-July restart with the Great Lakes Bay Invitational in Michigan.

What about the European Tour?

No word yet on when the European circuit resumes, although it looks like the British Masters at Close House – which remains in the schedule for July 30th-August 2nd – could be the one to kickstart its reboot.