West, East, North and South Championships have all fallen by the wayside due to Covid-19 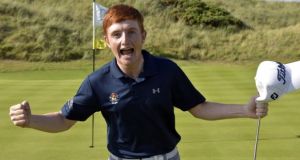 Ronan Mullarney was the winner at last year’s Irish Close.

All is not lost on the domestic championship schedule, for – although the Golfing Union of Ireland has bitten the bullet on a number of events, with the blue-chip Flogas Irish Amateur along with the West, East, North and South of Ireland championships all cancelled – there is a focus on ensuring that the AIG Irish Close Championship will provide both a highpoint and an endgame to the season.

In attempting to salvage something from a season decimated by the Covid-19 pandemic, the GUI has rescheduled the Irish Close for Rosapenna in Co Donegal for October 9th-11th and has put it at the tailend of a limited Bridgestone order of merit series that will also hopefully include the Mullingar Scratch Cup and the Munster and Connacht strokeplay championships but with the rider from the men’s governing body that “events will only proceed following rigorous risk management and consultation with the latest public health advice.”

While golf clubs in the Republic reopen next Monday (May 18th) for limited play, confined initially to club members only in phase one of the loosening of restrictions, and clubs in the North are included in stage one of the roadmap of the Northern Ireland assembly but with no restart date yet confirmed, the GUI is attempting to at least save a number of championships.

The Irish Close – the national championship, with a roll of honour that includes Rory McIlroy, Pádraig Harrington, Darren Clarke, Shane Lowry and Graeme McDowell – was originally to be played this week over the Sandy Hill links at Rosapenna but has been rescheduled for October in the hope that it will be able to be staged then. If it does go ahead, it will do so without caddies and players will be required to carry bags or push trollies.

Given the uncertainty on future travel into Ireland, and the number of international players which traditionally play in the event, the Irish Amateur Open – due to be played at Galway Golf Club on August 13th-16th – has been cancelled due to “uncertainty prevailing around international travel and related disease control challenges.” The championship was revived in 1995 when it was won by Harrington and has a roll of honour that numbers Louis Oosthuizen and Richie Ramsay among overseas raiders to claim the title.

In terms of the interclub competitions, the GUI is involved in an ongoing consultation process with clubs in the four provinces in the hope that a number of competitions – including the prestigious AIG Cups and Shields – can be restructured and played later in the season.