Sporting Controversies: Rugby’s relationship with apartheid all there in black and white 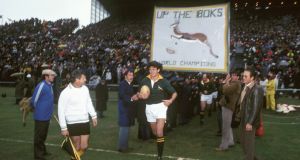 Morne Du Plessis leads out his team against the British Lions in 1980 in Port Elizabeth, South Africa. Photograph: Getty Images

No issue has divided or caused more controversy in rugby than apartheid, and specifically the sport’s links with South Africa and the Springboks while that despicable and often brutal regime was subjugating the majority of its people.

No issue will thus ever cause more shame for rugby union and it can never be erased from history.

When World Rugby, and the sport globally, patted itself on the back following the passing of Nelson Mandela in 2013 for having brought the World Cup to South Africa in 1995 it always stuck in the craw.

It was through Mandela’s generosity of spirit and political vision that the Springboks’ success on home soil at the 1995 World Cup was used to heal some of the deep wounds in South Africa which were caused by the apartheid regime and will linger into the future. It wasn’t through the foresight of the International Rugby Board, as it was then known.

Indeed, first things first, South Africa remained a fully fledged member of the IRB throughout the years of apartheid, from 1948 to 1994, which tells us much about rugby’s largely white, male brotherhood.

Even after Mandela was imprisoned in 1962 and spent 27 years in jail, 18 of those on Robben Island, before eventually being released in 1990, rugby retained its strong contacts with South Africa and the Springboks.

This also continued after the Gleneagles Agreement of 1977, when Commonwealth prime ministers and presidents – in support of their campaign against apartheid –- agreed to discourage all sporting contact with South Africa.

In a sporting context too, let’s not kid ourselves – the Springboks were the ultimate emblem of apartheid. Hence, anti-apartheid movements around the world, supported by the imprisoned Mandela and the African National Congress, backed sporting boycotts of South Africa and particularly rugby.

Yet rugby merrily continued its links. The four home unions sanctioned five Lions tours in the era of apartheid, three of them while Mandela was in Robben Island up to and including the controversial 1980 tour which contravened the Gleneagles Agreement.

New Zealand had four four-Test tours to South Africa in the apartheid era, including 1970 and 1976, an 18-match tour which began a fortnight after the Soweto massacre which killed hundreds of mostly student protesters. That tour also led to 25 African countries boycotting the 1976 Olympics.

New Zealand also hosted the Springboks on four tours, most divisively in 1981 when such were the strengths of the protests that two matches were cancelled and many games were disrupted – most famously the flour-bombed third and final Test in Eden Park.

New Zealand rugby continued on its divisive course after a proposed 1985 tour was cancelled (this followed Basil d’Oliveira being banned from an English cricket tour by the South African government) when all but John Kirwan and David Kirk of the original 30-man squad toured there a year later.

A so-called ‘rebel’ tour, they called themselves the Cavaliers, but there was nothing remotely cavalier or rebellious about them.

England toured there in 1972 and 1984, and France, rather ingloriously, hosted South Africa in 14 Tests and played six Tests in five tours there, up to and including 1992.

By contrast, Australia ceased all contact after hosting the Boks in 1971, and Scotland after doing so in 1969, until the lifting of apartheid.

As for Ireland, in addition to hosting the Boks twice and visiting South Africa once in the 60s, they hosted them again in 1970 and even more controversially toured South Africa in 1981, to a backdrop of demonstrations.

The Irish Anti-Apartheid Movement, which had been founded by Kader Asmal and Terence McCaughey (a Presbyterian clergyman who was its chairman for many years) in 1963, opposed the visits of 1965 and 1970, as well as the 1981 tour.

My parents were rugby fans and could buy tickets through my dad’s membership of Trinity (always touchline seats, hip flask passing between the two of them). My uncle Johnny Hughes played outhalf for Clontarf. But they were all members of the Irish Anti-Apartheid Movement and joined the protests against those Tests at Lansdowne Road in 1965 and 1970.

Asmal and his English wife Louise were close family friends both of my parents and my aunt Mary and her husband, Aidan Clarke. Asmal lectured in law for 27 years at Trinity, before returning to South Africa and serving in the first post apartheid government under Mandela (with whom he was friends) while Aidan was a lecturer in modern history and my dad was a lecturer in politics.

One of seven children of an Indian shopkeeper in Stanger, north-east of Durban, in what is now KwaZulu-Natal - Kader sometimes called himself “the coolie from Stanger”. With his long wavy dark hair and moustache, Kader, who also had Irish republican sympathies, cut an exotic figure, liked a cigarette and a drink, was hugely entertaining and was an endearing spokesperson for the anti-apartheid movement.

He was usually the one at the front of marches and demonstrations, with a tannoy in his left hand. Meanwhile, my uncle Aidan informed me yesterday that Louise was organising letters and donations from less high-profile members of the movement to families in South Africa who were deprived due to some of them being in jail.

“It was also run from Norway, but there was an Irish branch of that which Louise Asmal ran, and myself and Mary were among those who wrote letters and contributed. The idea was for people to write and donate who did not have high profiles in the movement because the South African secret police were trying to find out where the money came from.”

“This business of sending money went on for decades. There’s a book about the guy who ran this whole thing, the Red Dean they called him,” says Clarke.

In January 1970, several hundred demonstrators – including my parents, uncle, aunt and others – marched with Asmal and the Irish Anti-Apartheid Movement leaders in opposition to the Springboks’ match outside the hotel in which the tourists were staying. Several thousand protestors also assembled outside Lansdowne Road the following day before the match.

Of course, the game went ahead and the protests did not alter the minds of supporters, or the IRFU, who sanctioned a tour to South Africa in 1981, despite condemnation from the anti-apartheid movement and across the political spectrum.

Four players refused to travel, Donal Spring (who’d also ruled himself out of consideration for the Lions tour in 1980), Hugo McNeill, Tony Ward and Moss Keane.

“I’d actually been out there and seen what it was like and I said I’d never go back,” Spring told The Irish Times yesterday. “I’d been out there with London Irish in 1977. It was a very, very straightforward decision.”

And to those who maintained that it was better maintaining sporting links than severing them, so as to exert more influence for change?

“Well, sporting links with whom, the white minority?” says Spring. “At a cost to the majority? Ask John Robbie, who lives there now, if he thinks it was right [to tour] or not.”

In these pages recently, Robbie (the former Irish scrumhalf who stayed on after the 1981 tour) admits it is “a stain which will never leave me”.

“I had been lucky enough to tour South Africa with the Lions in 1980 and just had one of those amazing experiences, playing in the last Test. In 1981, the opportunity came up to tour with Ireland to South Africa. Should I have thought that touring apartheid South Africa was wrong? Absolutely. Did I know that what was happening there was wrong? I did. But I was thinking just about rugby, selfishly about the opportunity to be treated like a professional for a few months and play at the highest level. I have lived to regret that decision my whole life.”

And on it went. In 1986, although a Lions tour was cancelled, South Africans played in all-star matches in Cardiff and in London to mark the IRB centenary.

In 1989 a World XV, sanctioned by the IRB and funded by South African Breweries, played two Tests against South Africa in celebration of the centenary of the South African Rugby Board. The tour was supported by the IRFU, with Willie John McBride (a hugely popular figure in South Africa, where he had captained the Lions) managing the team and fellow Ballymena man Steve Smith travelling as hooker.

The tour was roundly condemned by the Irish Anti-Apartheid Movement, who said it was in clear breach of the UN policy on the sporting boycott of South Africa. Archbishop Desmond Tutu said the IRFU’s support for the tour when black children were being beaten, tear-gassed and detained without trial was “obscene”.

When the tour ended, an unrepentant McBride said: “I will maintain that rugby players should be allowed to play against whomever they please, without politics spoiling everything.”

After the tour, in a statement in September 1989, the IRFU said it regretted its decision to take part, and it belatedly ceased rugby contact with South Africa in October 1989, just a couple of years before the ending of the international boycott of South African sport.

Nonetheless Mandela maintained during his first of three visits to Ireland in 1992 that the Irish ranked with the Dutch and the Scandinavians as leading western nations in the anti-apartheid solidarity movement.

Clarke maintains Mandela, who also accepted an honorary degree from Trinity in 2000, was not just being polite when giving due recognition to the Irish Anti-Apartheid Movement.

“He [Mandela] knew perfectly well what was going on here and he was the reason Kader went into government in South Africa, because of the work he’d done in Ireland.”

So there were many heroic exceptions, both within and outside rugby, including in Ireland, such as the Dunnes Stores workers who refused to handle South African products and then organised pickets outside their stores.

However, as Spring contends: “The rugby tours gave them respectability and the boycotts hurt them more than anything else.”

So it is that rugby’s relationship with apartheid, both good and bad, can never be erased. It’s there in black and white.