Exotic mirage of Longchamp provides a tonic for racing fans 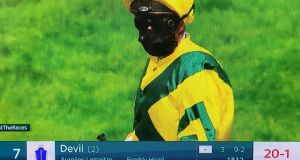 Aside from the jockeys looking like Dick Turpin in their face-masks, the resumption of racing in France on Monday mostly looked reassuringly normal.

Paris’ premier track at Longchamp is only five kilometres from the Eiffel Tower but usually only gets filled for the Prix de l’Arc de Triomphe in October.

French punters historically favour cafes for their betting ambience so the social distancing policy behind closed doors meant that, on TV at least, little looked different for the first meeting in France since St Patrick’s Day.

However the cancellation of most live sport in Europe reflects how practically all else has changed since then due to the Covid-19 pandemic.

This then was a glimpse of real, live competitive action that could be pounced upon by locked-down populations starved of sport far beyond the Bois de Boulogne.

For Irish racing fans in particular, facing the prospect of no resumption of the sport here until the end of June, the sight of horses and jockeys loaded into stalls before 10am in the morning looked like an exotic faraway mirage.

Hark back to normality

Ordinarily it would have caused barely a ripple in the racing ocean. Now it felt like a heartening hark back to normality in very abnormal times.

Guyon has won classics during his career. Later on the card he won the Group Two feature on Shaman. But his punch of the air crossing the line in the first spoke volumes about the context.

Doing the talking over the pictures from France was Sky Sports Racing. Having last year lost coverage of Irish action to the subscription channel Racing TV, its profile had been struggling. The rights to French racing pictures felt like poor consolation. Now they’re the only show in town.

Longchamp was later followed by jumps action at Compeigne and a mixed evening fixture in Toulouse.

If the decision to allow racing resume was a mere footnote on President Macron’s list of weekend priorities then his green light produced a 12-hour oasis of action in a barren sporting landscape.

No doubt the opportunity for a bored populace to bet their brains online with gambling conglomerates desperate for turnover will represent a tricky ethical problem for some.

But for the French racing industry it is an open goal to showcase itself while the sector is shut down in both Ireland and Britain. Longchamp was even trending on Twitter.

That it all proceeded with apparently the minimum of fuss will serve only to heighten the frustration in racing circles here.

On screen at least there were no morons flagrantly flouting the two-metre social distancing rules. The only contact looked to be the brief lift trainers gave jockeys into the saddle.

By necessity the etiquette of how to carry out the rules looked a little loose at times around the starting stalls but presumably no jockeys were coughing or spluttering at 35mph during the races.

Sky’s on-course reporter, Katherine Ford, sported her own white mask throughout but confirmed that jockeys didn’t have to wear them during the actual race.

“If they are not bothering them during the race, if it is not stopping them breathing, or not at ease in their physical efforts, they just decide to keep them on,” she said.

The concern about the masks beforehand was that a rainy day might produce mucky kickback.

In the event the sun shone on Paris and even at home it was hard not to at least shrug, figuratively reach for a Gauloises, and involuntarily assume the inflections of Laurent Barbarin.

Sky’s French racing expert guided the audience through the local form. His accent alone made it all seem a long way from Thurles on a Thursday. But some things racing are universal.

In fact he predicted the latter’s trainer, Andre Fabre, 30-times champion trainer of France, would have a successful time of it on the 10-race Longchamp card.

Except Victor Ludorum could finish only third to The Summit, a 28-1 outsider, and was one of a number of Fabre flops.

By the Prix de la Grotte, Laurent had deserted Fabre for someone else’s ‘filleee.’ Inevitably the winner was Fabre’s favourite Tropbeau.

“After what has happened I don’t know anymore,” Laurent admitted with a Gallic air of existential resignation. “It is tricky today.”

It’s tricky every day, infuriatingly so at times. All of which makes occasionally cracking the code – and beating those bookies who always seem to wear masks – a thrill in anyone’s language.