Reaction to Seán Cavanagh remark is nothing short of bizarre 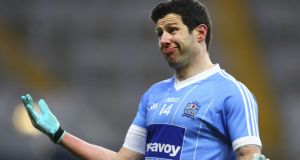 A few simple words from Seán Cavanagh in an interview has seen him come in for abuse on social media. Photo: Ken Sutton/Inpho

For someone with so distinguished a football career and a generally impeccable way of carrying himself, former Tyrone captain Seán Cavanagh appears to have acquired an unfortunate habit of being ambushed by controversies.

The latest is on the dafter end of the spectrum. He made a harmless reference to the impact of the coronavirus pandemic in Northern Ireland when talking to Mikey Stafford on the RTÉ GAA Podcast at the weekend – for which he was subjected to sustained abuse on social media.

“Up here in the UK it’s a bit bizarre as well,” he said, “because we all probably are watching Leo [Varadkar] and watching the GAA’s announcement and see ourselves as part of that. But equally, in terms of the day-to-day living, we’re waiting on the announcement from Boris [Johnson, prime minister].”

It may in retrospect have been more prudent to refer to the six counties or “over the border” or simply to have left it at “up here,” but the question specifically referenced the fact that Tyrone was one of the Ulster counties governed by different regulations.

At the heart of the Belfast Agreement is the intricate idea that jurisdiction and identity can be separated. Cavanagh was clearly drawing that distinction between UK regulation and Irish nationality – not that this saved him from the usual intemperate reactions on Twitter.

The most bizarre episode for me was when, before that Man United game, I had to stand with the Union Jack raised in front of me

Curiously there were also a number of negative observations from representatives of Sinn Féin, one of the parties that negotiated the agreement, which accepts the reality of two jurisdictions until a majority decides otherwise, and campaigned for its acceptance 22 years ago this month.

People can draw their own conclusions what all this says about the sincerity of aspirations towards inclusiveness but that’s not even the main issue. The rush to paint Cavanagh as a “quisling” is simply inaccurate, as even a cursory glance at the above comments indicates.

His upbringing was conventionally nationalist and in his autobiography The Obsession he mentions his discomfort with the formalities before playing an under-14 soccer exhibition for Dungannon Swifts against Manchester United.

“The most bizarre episode for me was when, before that Man United game, I had to stand with the Union Jack raised in front of me and ‘God Save the Queen’ being roared out. I remember looking around and wondering, ‘Jesus, am I okay here? Will I get into any trouble for standing for this anthem?’”

In the course of the online hostilities at the weekend, it was also recalled that after an incident last summer in the Tyrone team bus returning from a match in Cavan, when some players started singing, ‘Come Out Ye Black and Tans’ on encountering the annual Lisgenny Flute band parade in Aughnacloy, Cavanagh had declared himself “embarrassed”.

At best, if this was some aggressive declaration of loyalist supremacy the reaction would have helped those attempts to create equivalence between the Orange Order and the GAA – which the association had to lobby hard to resist back in 1997 when the Parades Commission was being established and there was a push to include Gaelic games in its remit.

The truth of the matter was, however, eloquently outlined by journalist and GAA writer Declan Bogue, who lives in the area and wrote about the incident last July.

“To give some context, this parade used to take place at 7.30 on a Saturday night. However, that coincided with the local Saturday night Mass at St Mary’s Catholic Church. So, in the spirit of co-operation, the band delayed the start to 8.30.

“Here’s a detail for you; the stewards at the parade actually waited until the local parish priest, Fr McEvoy, was in his driveway and waved to him to signal that, with the parishioners returning home, they would start then.

“Like many other country bands, this is not a Blood and Thunder, ‘Kick The Pope’ band. They are more inclined to play hymns. It is not uncommon for some musicians in these bands to double up and play with the Brantry Hibernian Pipe Band, and parade on St Patrick’s Day.

“If all of that sounds inclusive, it is because of the outreach work done in the community, of which I am a part, having moved here in 2015.

“Since settling here, I have become involved in the local GAA club, Aghaloo O’Neill’s, and have also helped, along with others, a hurling and camogie club, Cúchulainn An Ghleanna.

“Our aim in both cases is to attract as many people with an interest in playing Gaelic football, hurling, and camogie, from all faiths and none. As long as you enjoy sport, you are welcome.”

Neither was Cavanagh the only one embarrassed, as Tyrone manager Mickey Harte later apologised for the behaviour of his players.

The point at issue in all of this is what constitutes Irish identity? Seán Cavanagh in his football career was one of the most prominent performers in one the great expressions of our national sporting culture.

He won three All-Irelands with Tyrone, literally in the case of the 2008 title after which he was named Footballer of the Year and was awarded the fourth of five All Stars.

That same year he captained Ireland in Australia in a very challenging international rules series during which the entire concept was on trial after the GAA had pulled out of the previous year due to the outlandish violence of the second test in 2006.

Both sides needed to be on their best behaviour and the AFL were especially anxious as the tests were also marking the organisation’s 150th anniversary. There was, as a result, added significance to some of the formalities, including a dinner for both teams the week before the first test.

As the captain, Cavanagh was a great ambassador for the event and also fascinated the local media with the fact that when younger he had turned down a career with the Brisbane Lions in favour of Tyrone and accountancy.

On the field he was a dynamo and ran Graham Canty close for the Jim Stynes medal for Irish player of the series.

In summary, he represented Ireland and the GAA’s sporting culture magnificently, which is something purveyors of spiteful invective and little tricolours on social media should reflect on before maligning him.

1 Monica Seles: The warrior queen who could have been the best ever
2 From Sheikhs to the supporters: who owns Europe’s biggest football clubs?
3 Séamus Power rockets into share of clubhouse lead in Detroit
4 MLS must eradicate the cancer of neo-Nazi hooliganism
5 Bastian Schweinsteiger taking legal action over Nazi doll
Real news has value SUBSCRIBE