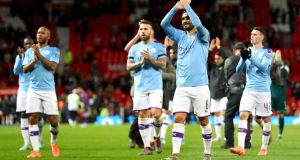 There is, as we know, no end to the chat each and every January about how the FA Cup has mislaid its magic, but spare a thought for the English League Cup which never really seemed to acquire any in the first place.

Not even its sponsors could maintain their love for the competition over any kind of sustained period, hence it going through spells of being known as the Milk, Littlewoods, Rumbelows, Coca-Cola, Worthington’s, Molson Coors/Carling, Capital One and Carabao Cup. Only your average fugitive on the run has acquired more monikers.

So, the first leg of the first 2019-20 Carabao Cup semi-final on a damp-ish Tuesday night in Manchester in early January is not, on the whole, the stuff of footballing telly dreams. But, at least, a little bit of lustre had been sprinkled on the occasion by way of it being a Manchester derby.

Last they met, City were pulverised (2-1) by United on their own patch, so when Sky Sports’ Scott Minto announced the team news, it seemed liked a soft-hearted Ole Gunnar Solskjaer was intent on giving City a chance to regain some pride by naming Phil Jones in his back four.

City old boy Micah Richards, sitting alongside fellow pundit Darren Fletcher, attempted to stifle his giggles, and, while trying not to be too rude, suggested that a quarter of City’s bench – namely Aguero, David Silva, Gabriel Jesus and Ederson – was actually stronger than United’s first XI.

In his playing days, Darren never shied away from even a 10-90 tackle, but this time he couldn’t even muster enough fight to nibble on Micah’s ankles, the sight, perhaps, of Jones, Jesse Lingard and Andreas Pereira in United’s starting lineup sufficient to knock the stuffing out of him. There was a time you’d add Fred to the ‘OMG WTF?’ reaction to Ole’s XI’s, but in contrast to the bulk of his workmates, he’s looked like the love-child of Roy and Pirlo of late.

A quick pre-match chat with Solskjaer, whose brow now has taken on the shape of a furrowed field, the fella having looked like Harry Potter when he took on the job, now bearing more of resemblance to Methuselah.

And then a natter with Pep Guardiola who doesn’t look a whole lot less stressed this weather, the one thing uniting his shower with Ole’s being the sight of Liverpool disappearing over the horizon.

Scott, as gently as possible, pointed out to Darren that United have been, on the whole, shite this season, but Darren was having none of it, his empty glass overflowing. “Ole Gunnar Solskjaer is the man to rectify that,” he said, reminding us that choosing former team-mates of highly likeable managers to cast judgement on their reigns is highly unlikely to ever yield candid assessments of said reigns.

Teams in the tunnel. ‘This Is The One,’ booming around the stadium, like it was the Nou Camp in 1999. And by the 37th minute City were 3-0 up and Alan Smith was struggling to find the words. He broke his silence with “this is getting a little bit embarrassing for United”, which was akin to saying Charlie Flanagan’s handling of the RIC commemoration has gone smoothly.

“City on a roll, City on a stroll,” said Martin Tyler while Alex Ferguson looked on from the stands, the hairdryer twitching in his pocket, him most probably gumming to visit the dressing room at half-time to have a word.

(Twitching in the stands, too, the United money men, realising that they’ll have to spend the GDP of, say, China, to put this right).

The notion is, of course, that Ole produces no more than a set of hair curlers in his half time dressing room, asking his lads to try just a tinch harder, if they wouldn’t mind, which is possibly why the City contingent in Old Trafford spent the bulk of the second half singing, “Ole Gunnar Solskjaer, we want you to stay”.

Marcus Rashford’s goal put a brief pause on their gaiety, but come full-time the only thing that bonded the teams was their failure to know what to do about Liverpool. Other than that, City’s neighbours are proving less than noisy.

“United are still in this tie,” insisted Darren come full-time. And he reckoned Nemanja Matic was terrific. And Ole was doing fine.

And Comical Ali was a conveyor of truth.

‘Out-dated, outmoded, and turning people off’: Niall Moyna on championship

James McClean: ‘The abuse in the last few games has simmered right down’ 06:00
‘Out-dated, outmoded, and turning people off’: Niall Moyna on championship 06:00
Cross-Channel interest in Dublin Racing Festival could rest on La Bague Au Roi 06:00
Blackmore and de Bromhead preparing to put it up to Mullins Team 06:00
Sean O’Brien 4.0 - Leinster starlet ready for Under-20 debut 04:00