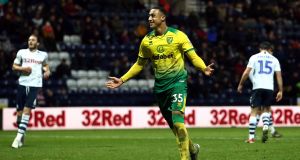 Mick McCarthy would have been forgiven for feeling a little wistful as BT Sport’s Jake Humphrey listed out to him the number of Irish nippers who are making an impression in English football this weather.

A bit like a gardener forced in to retirement before his petunias get a chance to bloom, albeit conceding that Stephen Kenny had done the bulk of the fertilising, he reminded Jake that he’d be gone from the Republic of Ireland job come summer and, so, wouldn’t be the long term beneficiary of a front four of, say, Adam Idah, Aaron Connolly, Troy Parrott and Michael Obafemi.

Cripes, the future’s so bright, it’s like we’re staring at the sun.

With that FA Cup hat-trick for Norwich, Idah had sent a tingle up and down both of Jake’s legs, him being a Canary, and possibly even caused Delia Smith’s soufflés to explode. But while Mick is never one to get over-excited about these things, his inclination being to roll his eyes in the direction of the heavens when we lose the run of ourselves over the potential of a young fella, he conceded that Idah had somewhat enhanced his prospects of a senior call-up any day soon.

“He’s scored a hat-trick today, and he’s playing in a real competitive game - it’s not under-21s, under-23s, it’s an FA Cup tie against a good Preston team,” he said, which might have been an upper cut in the direction of the chins of those who lobbied a touch aggressively for a senior call-up Parrott.

Parrott, incidentally, was left sitting on a bench in the north east of England for Spurs’ FA Cup tie against Middlesbrough, despite them being Harry Kane-less and in urgent need of a goal, adding some weight to the notion that Jose Mourinho hasn’t enough patience to wait for his petunias to bloom, preferring instead to purchase flowers like Zlatan Ibrahimovic who blossomed around eight years ago.

Idah, though, was born in 2001, when Zlatan made his debut for Sweden, which is a bit obscene, when you think about it.

Now, some might argue that scoring a hat-trick against Preston North End does not necessarily make you a fusion of Gerd Muller, Marco Van Basten and Ferenc Puskas, but they’re the kind of people who would look at a glass 99 per cent full of champagne and declare it one per cent empty. Bad cess to them, let us luxuriate in hope.

Mind you, come Match of the Day on Saturday evening Gabby Logan attempted to put the wind up us by intimating that Mick would have to cap our Idah “to make sure Ireland keep hold of him”, the suggestion being that we could be about to embark on a Jack Grealish/Declan Rice trip all over again. There was no end to the abuse Gabby received for this declaration, but she was actually correct in one aspect - Adam Idah’s second nationality is Irish, his first is Cork, by the Grace of God. But you’d like to think the Rebels will lend him to the nation.

The only dampener on Mick’s day, as it proved, was that he was on BT duty for Manchester United’s FA Cup trip to Wolves, “soulless and goalless” as he described the fare. Come full-time, Jake asked Rio Ferdinand, Mick’s punditry partner, “do you see where United are going?” “Not super clearly,” he replied.

Then Jake turned his attention to what club might hire Mick after he steps down from his Irish post. “I’m sure I’ll be getting the Red Adair job again, putting fires out, that always seems to be the case,” he said, thereby putting himself in the frame for the Old Trafford gig.

Come Sunday, Liverpool fielded a team of teenies against Everton. “He probably feels like a teaching assistant in a kindergarten,” said the BBC’s Steve Wilson of the antiquated Adam Lallana, although the average age of the side was reduced to in or around 12 when James Milner hobbled off.

And then veteran Curtis Jones (18) scored and Liverpool won. And that’s all they do these days. Win. Even when they field babies. Blooming petunias.