Mary Hannigan’s All in the Game 2019 awards - part two 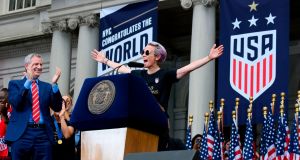 Megan Rapinoe is an unlikely visitor to the White House. Photograph: Johannes Eisele/AFP/Getty

“Ireland play football like Michael Flatley dancing.” - Georgia manager Vladimir Weiss ahead of that 0-0 in October during which neither side displayed feet of flames. You’d imagine Flatley hastily consulted his lawyers.

0 - The chances of Megan Rapinoe visiting Donald Trump in the White House. She’ll only go there, she said, if she’s being “inaugurated”. Could happen, too.

“You expect better from a Premier League referee. You expect the cream. Well, if that’s the cream, I’d hate to see a pint of sour milk.” - Accrington Stanley gaffer John Coleman a touch unhappy with Jon Moss after their FA Cup defeat by Derby.

Runner-up: “What is this buffoonery from the referee who sends off a gentleman like Ancelotti? Without us, the referees would be peeling potatoes.” - Napoli president Aurelio de Laurentiis spittin’ after his club’s 2-2 draw with Atalanta.

“He’s like a fire engine that turns up and discovers the house has already burned down - he’s that late.” - Martin Keown somewhat insinuating that Arsenal’s Granit Xhaka is lacking in the tackle-timing department.

Runner-up: “It’s like going into an Olympic rowing final and being asked to compete in a dinghy - and you’ve lost your Steve Redgrave.”- Chris Sutton predicting that Chelsea would sink without a trace in the absence of Eden Hazard.

“I’d say you Scottish guys just drink all the time in general, not only whiskey... there’s some people that speak really fast and you tend to get lost in their accent... there’s not been one day I’ve been in Scotland it’s been sunny and nice here. It’s always been cold and raining.”- Apart from that, Paris Saint-Germain’s Timothy Weah enjoyed his loan spell at Celtic tremendously.

“I’d never seen an Argos before in my life. I walked inside and saw the catalogue with things you can order. You can order bikes! TVs! Argos has everything! I’ve never seen this in my life before! When I need something, I buy it from Argos!” - Cuban Onel Hernandez on the chief reason why he was loving life in England after he joined Norwich City: Argos. As one Norwich fan responded: “Imagine when he discovers Amazon.”

“I think he should decide on Bayern, he would fit like an arse in a bucket.” - Former Danish international Stig Tofting advising Christian Eriksen to choose Bayern Munich over Real Madrid because, well, it’d be a snug fit.

Most Vexed About Var:

“Last year we asked for VAR in the Champions League because we got screwed in the semi-final and tonight they’ve got VAR and we still get robbed. I’m tired of this shit. I give up.” - Roma president James Pallotta after his side were knocked out of the Champions League thanks to Porto’s VAR-awarded penalty in extra-time.

“You traded immortality for mediocrity: never a Celt, always a fraud.” - But, no doubt, the Celtic fans holding up this particular banner wished Brendan Rodgers all the very best at Leicester.

“Handbags, bumbags, manbags... I don’t know what you’re allowed to say in this day and age. But bags of some kind, that’s all.” - Burnley manager Sean Dyche, struggling an acceptable word for a kerfuffle at Stamford Bridge.

Least Impressed By The Convoluted And Never-Ending Euro 2020 Qualification Process That Seemed To Offer Ceaseless Qualification Opportunities To Even The Most Rubbish of Footballing Nations:

“I think you should have to earn qualification by merit, not by beating teams of your own standard because you’re brutal and the others are a little bit more brutal.” - Brian Kerr.

“I started using a sleeptalking app years ago. Robbo [Andy Robertson] said: ‘I also talk in my sleep.’ So we used it and we found it was me who was doing most of the talking - in Spanish. Robbo was making farm noises.” - James Milner.

Most David Brent-ish Gaffer of the Year:

“I have a vision that nobody else has. I’ve got bravery that no other coach has probably had. So, do you know what? Thank your lucky stars. I’m here. I’m here to stay…..I live and breathe it, and I never have a bad day.” - Phil Neville on how fortunate the English women’s team is to have him.

Most Controversial Guidance Offered To Players About Their Personal Lives:

“I advise my players to have sex for short periods, with the minimum of effort and preferably with their wives because then you don’t have to be exceptional.” - Inter Milan gaffer Antonio Conte had some explaining to do when he got home.

“Mesut Ozil is the cherry on the cake - but unfortunately we ain’t got a cake.” - Tony Adams.

“Dunk and Duffy... sounds like a donut shop.” - Brian Kerr on Brighton’s big lads at the back.

“The Mozart of our game, Lionel Messi. Even the crickets in the trees love him. Crickets play football as well, and they say this guy is something else.” - BeIN Sports’ Ray Hudson. Nope, we had no clue either.