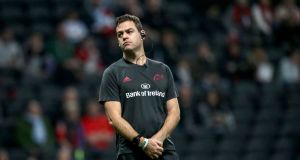 This won’t feel particularly significant for their supporters, for whom Europe is paramount, but if Munster ultimately fail to reach the knockout stages then aside from taking every point that was on offer, earning themselves a better pool draw was as costly.

It was by dint of finishing second in Conference A, and losing in the semi-finals, that Munster ran the risk of a third-tier seeding for the Heineken Champions Cup draw. So it came to pass that, lumped with Saracens and Racings, they were thrown into the pool of sharks.

A stronger Pro14 campaign would ensure a better seeding.

“That’s massively important,” admitted Johann van Graan. “The previous two years we got to semi-finals away against Leinster in the RDS and we have got to try and avoid that, and the only way you can avoid that is to to the pool. So there is a lot of rugby left in the Pro14, there are 11 rounds left. So I guess the answer to that is you have to top your conference if you want to get to a final as the seedlings become easier.”

Against the financial behemoths of Racing and Saracens, it has always felt that Munster were competing against the odds, albeit that’s not terribly new.

“We as a group, we will stick together and improve,” said van Graan. “It is pretty difficult to say but tonight there was a lot of improvements and I thought we did a lot of things really well tonight against a quality outfit but on this pitch when they cut lose it is very difficult to stop.

“One of the things we could have done better tonight was finish opportunities and as a group we need to look at that and finish opportunities, like on 60 minutes we literally over the try-line twice and then it becomes a different game. I guess that’s our challenge, to become better and that’s what we set out to do and we will continue to do that.”

The contrasting use, and impact, of the respected benches reflected this financial discrepancy, and van Graan admitted: “We always want to improve our squad and our team and I would say every player gave it everything they have got. I am never a man to make excuses but unfortunately one or two guys are injured at this stage but for 71 minutes we did incredibly well out there today.

“But like I said that last nine minutes and that finish there for Teddy Thomas, sometimes the ball doesn’t bounce for you and it didn’t in the last few minutes but we will regroup get back home and go again next Sunday, like Pete said finish this competition well but it is out of our hands. We might get lucky, we might sneak in off the back end. The only thing we can control is our performance at Thomond Park next Sunday and I would like to believe we will perform like we did tonight. I think the complexion changes then there is a four-week period where a lot of guys go to the six Nations, and there is the Pro14 and then a break again and it is into the back end of the season, and fixture-wise we have a massive amount of fixtures in April and May.”

Results lately, losing at home to Edinburgh and being thrashed by Ulster when dipping into their squad, rather underlined the impression that while Munster have a good team, they lack squad depth. Admittedly, and this is no reflection of the performances of Rory Scannell or Chris Farrell, but the thought occurred as Virimi Vakatawa did his thing and Munster struggled to create go-forward ball on the gain line, the presence of Damien de Allende there would have been helpful. The World Cup winner’s physicality will add another dimension to Munster’s impact on the gain line, as will RG Snyman. That’s where the game is now.

Understandably, and true to type, van Graan hailed his players’ honesty of effort.

“The players were excellent. We were in that game for 71 minutes, a magic moment there by Teddy Thomas and then we had to play catch-up against a Racing side that threw the ball around and scored those final tries.

“Big moments in the game – on 43 minutes we got penalised under their sticks and then on 60 minutes, we were over their try-line twice and couldn’t get the ball on the floor.

“It’s a tough one to take if you perform like that for 71 minutes. It’s tough to lose that way but rugby games are 80 minutes and they were just magical there at the end.”