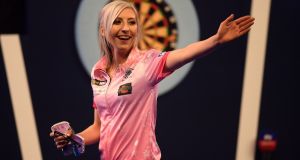 When we were listening to Barack Obama give his November 2012 victory speech in Chicago, after he’d seen off Mitt Romney to win a second term, did we ever think – and don’t lie – his words would be used as the soundtrack for a moment of darts-chucking history in the Ally Pally seven years on?

To be honest about it, no. But that’s the best thing about Sky, their ability to think up mad things and just go for it. So, over images of Megan Rapinoe, Serena, Tanni Grey-Thompson, Billie Jean King and Fallon Sherrock (but, thank Jesus, not Rosa Parks): “If you’re willing to work hard, it doesn’t matter who you are or where you come from . . . It doesn’t matter whether you’re black or white . . . or rich or poor, able, disabled, gay or straight, you can make it . . . if you’re willing to try.”

But then some inebriated men dressed up as lobsters, gyrating furiously after Fallon hit yet another one-hundred-and-eiiiiiiiggghhhhty against Ted Evetts, popped up on the screen and there was a slight sense of the solemnity of the moment having been lost.

Nothing, though, could take away from Fallon’s historic achievement when she beat poor Ted in the first round of the PDC World Championships, Ted deserving of at least an OBE for his affability when his every treble 20 was greeted by cacophonous boos from the crowd, including from that man in the deflated hot dog outfit.

What would have made you warm even more to Ted was the fact that he looked a little like a failed candidate from The Apprentice, whose business plan was something along the lines of a 24-hour mobile dog-grooming service in the Cotswolds, one that would have earned an eyebrow wiggle from Karren, an eye-roll from Claude and a pointy finger from Lord Sugar, before Ted departed in a taxi, his determination to make his business plan work not remotely diminished by all the negativity.

“Fallon was utter class,” he said afterwards. “I am on the wrong side of history,” although he found some solace in the fact that he would become “a great pub quiz question, which is quite nice”.

That’s the problem with the BBC holding its Sports Personality of the Year awards too early in December: if there’s somebody more deserving between then and the clock striking midnight on New Year’s Eve, they’re consigned to the black hole of our sporting memory. No arguments about Ben Stokes winning the big prize, but Ted, for his loveliness, might just have pushed him close.

And Fallon might have too. “It’s the match that changed everything, it sent shockwaves around the globe,” said our host Dave “Five” Clark. “Newcastle to Nashville, it’s been absolutely huge,” said Laura Turner, and, while Wayne Mardle was no less excited about Fallon’s feat, he was worried about all that booing of her opponents. “There’s no need for that in the game, we want that eradicated, but unfortunately it’ll be impossible unless it’s behind closed doors,” he said.

But barring entry to gyrating men dressed up as lobsters and others in deflated hot dog outfits, not to mention the chap who came as Colonel Sanders accompanied by two men in chicken costumes, and the group dressed up as Austin Powers, and the woman holding the “I Stand with Özil” sign (probably a Spurs fan), would rob the Ally Pally of its very essence.

Mensur walked on to Simply the Best, and the roof of the Ally Pally was nearly blown away by the boos

“The world is watching,” said Dave as Fallon entered the arena for her second-round match against Austria’s Mensur Suljovic, Wayne doubting that she would prevail again because she’d had to do so much media stuff since beating Ted, including an appearance with Piers Morgan on ITV when she should have been rewarded rather than punished for her darts-glass-ceiling-smashing.

As Fallon arrived on stage, the cheerleaders in their decidedly skimpy pants wiggled their buttocks quite violently, although it was hard not to notice that they had the exact same dance routine for, say, Mervyn King’s murderous Motörhead walk-on tune as they did for, say, Dimitri Van den Bergh’s Happy.

Mensur walked on to Simply the Best, and the roof of the Ally Pally was nearly blown away by the boos. Fallon arrived to the tune of Katy Perry’s Last Friday Night and the Ally Pally showed her so much love, Mensur knew in his bones he was doomed.

“I smell like a minibar,” sang Katie, and the men dressed as lobsters and the man in the deflated hot dog outfit went wild. And then Fallon beat Mensur.

“Walking along, singing this song, walking in a Fallon wonderland,” the Ally Pally bellowed. All their Christmases had come in one.