Sonia O’Sullivan: The loneliness of the long-distance running circuit

It’s a long, hard road to the top in athletics and only the most durable survive 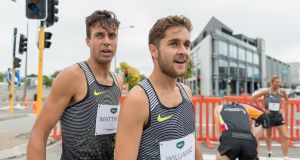 Luke Mathews and Jordy Williamsz of Australia. Both men are following a hectic schedule as they try to plot a route to the top in the sport they love. Photograph: Kai Schwoerer/Getty Images

In some ways the running circuit hasn’t changed much since my time. Hanging around the hotel lobby, transport to the stadium, racing in front of a big crowd and, if you’re lucky, something to boost the bank balance at the end of it.

In other ways things have changed. This is the international lifestyle that many young athletes aspire to, and from the outside it can look pretty glamorous. In reality it’s a lot more hard work and at times lonely too.

Training is often at nine and at five, rather than the typical nine-to-five day that most people live; that’s two runs a day, usually a gym session squeezed in between, maybe a recovery massage and then legs up for the rest of the day, which is not as attractive as it seems. I for one was never very good in this area.

In essence little has changed around Teddington in Southwest London since when I ran my first lap around Bushy Park, shortly after the Barcelona Olympics in 1992. It is still a haven for middle distance runners from across the globe to base themselves between races throughout summer.

At this time of year it’s easy to find yourself wandering about, reliving fond summer memories of training runs around the local parks. There aren’t as many Kenyan athletes in the park these days. You’re more likely to see athletes from Australia, New Zealand, Canada, USA, maybe a few Irish, and more locals as well, appreciating what the visitors have enjoyed for well over 30 years now.

The House on Park Road – also known as Thurston Lodge 1868 – is still there, athletes coming and going between races. The door colour has changed over the years, black, yellow, now red, it’s the perfect location for a summer base.

It’s a short jog to Bushy Park, 11km around, perfect for speed sessions and flat as a pancake, with a few well-watered cricket grounds amidst the sunburnt dusty trails. Richmond Park is another few miles along the River Thames, and the local track and gym at St Mary’s college.

With trains close by, the X26 direct bus to Heathrow airport, and a fine selection of bikes to choose from too there’s no need for a car. It’s also a short stroll to the local Tesco, and one attractive new addition in town a perfect cafe, called Woof, the gathering point for athletes at least once a day as they while away the hours between training sessions.

One thing I sense has changed is the work ethic, because if anything athletes are even more dedicated these days, with smaller prospects for success, financial or otherwise. Not everyone gets to line up in a Diamond League event, and even when they do the pressure is on to perform to show that they belong, and deserve another chance.

The athletes I spent some time with over weekend were just off a block of altitude training in Spain. This is one of the reasons there aren’t so many Kenyans around Bushy Park now. They prefer to endure the travel back to Kenya between races, to ensure the red blood cells are topped up to help maintain a high level of performance throughout the season.

At the London Diamond League, on Saturday and Sunday, I got to see up close the inner workings of the circuit through the eyes of athletes that rarely get seen or mentioned on the big stage.

These athletes are the journey men and women, who make up the vast part of the international circuit. Without them there would be no spectacle for the fans, and these are the ones working hardest to be the best they can be, often on stand-by for the call up to big races to get the chance to run a fast time, or just get in amongst the higher-ranked athletes to establish themselves.

Among the athletes in Teddington are the Australians Jordy Williamsz and Brett Robinson, who’ve have been hard at work the past two weeks. Jordy ran four races in 11 days, with two personal bests, his 3:36 for 1,500m an update on his 2012 best. It took him six years, and shows the persistence to get back to your best and the commitment the sport often requires.

That race was in Lignano, Italy where Jordy finished second. Then it was back to Teddington for three nights, a few runs and a speed session. Next up a flight to Cork for a 3,000m, where he was second again, another personal best, beaten to the line by Robinson, who went on to run 13:26.5 at the Morton Games in Santry a few days later, while Jordy dropped down to 800m for a season best 1:47.

That’s 11 days, seven races, four countries, and countless hours of travel. In ways the investment is far greater than the reward, so much travel for the chance to run fast, often the only reward a bed and food while there. Jordy and Brett do better than most, but still the payback is in the region of €1,000 each, hardly a professional purse.

These guys are working like Superman on Clark Kent’s wages. They certainly aren’t in it for the money. When you see how hard these athletes train, and they’re in bed most nights by 10pm, it’s not the glamorous lifestyle you think of when you see a Diamond League event on TV.

After the Morton Games in Dublin, the Teddington crew flew on to Heathrow. Here the group split, a few heading to Heusden for the Night of Athletics, renowned amongst distance runners for fast times. Brett continued his good form over 5,000m running a personal best 13:15, paying his own way just to get on the start line.

We were met at Heathrow outside the baggage hall, given a ticket for the Paddington Express and escorted to the train door. From there it was a black cab transfer to a four-star city hotel where all meals are provided. Once in the meeting everyone is treated equally.

There are bus transfers to the stadium throughout the day, massage available at trackside, when it’s all over you are returned to the airport or just make your way back to Teddington on the local train networks. It’s all pretty exhausting, and I was only involved in the travelling part.

There’s a lot to be said for the athletes that continue to persist every year, putting their lives on hold to achieve personal bests and the ultimate prize to represent your country on the world stage and ultimately at the Olympics.

For all the attention given to the young Irish athletes recently, it’s a long hard road to the top. Not just the fastest runners succeed but the ones most durable are most likely to fulfil their ambitions.

1 Avoid the treadmill at all costs – marathon training in the 2km radius
2 Rich Premier League clubs way off the mark in cutting staff pay
3 Sonia O’Sullivan: Taming The Tan gave us one last roll of the dice before shutdown
4 Reality Bites – Tales from the new normal: Shane O’Donnell
5 My favourite sporting moment: When Sea The Stars showed us what perfection looks like
Real news has value SUBSCRIBE