After failing agonisingly to reach the Olympics, Ireland eager for World Cup action 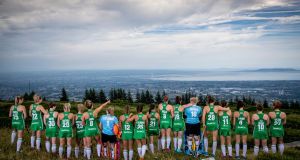 Those were the days of obstruction, hand stops, offside, 11 starters and three substitutes. A better modern game has taken over.

The 1994 event was staged in Dublin for the first and only time and Ireland came 11th, their best-ever placing. But this weekend in London the current squad are aiming higher when they face USA in the first pool match.

With the competition now expanded to include 16 teams, Ireland are targeting a quarter-final. If that was achieved it would put coach Graham Shaw and his Irish side among the top eight in the world, far above their current ranking of 16.

The Irish team is due some positive karma after a few ‘close but no cigar’ moments that kept them out of the Olympic Games two years ago. The team fell short by the finest margin.

Ireland would have qualified for Rio along alongside the men’s team but for a penalty shoot-out with China, which went with the Asian team.

When the sides finished 1-1 in the qualification event in Valencia in 2015, it was the Chinese who came through 4-3 to book a place in the Games.

But Ireland can take heart from regularly beating sides that are ranked higher than they are. At the time, China were ranked seven in the world.

Shaw has since taken over from Darren Smith as coach, while a lot of the players remain in place. USA, India and England are in Ireland’s World Cup group, all of them, like China were prior to Rio, are ranked higher.

“It doesn’t get much closer than going to penalties against China,” says Irish captain Katie Mullan. “Nearly all of the girls are still involved. There’s only a couple that weren’t there. I think that has made us even stronger and given us something to really fight for.

“I think we have in the past in tournaments beaten the USA, we’ve beat India. When you look at it like that and look at the teams we are playing against . . .are we capable of beating them? Yes because we have beaten them in the past. It may seem that we are aiming high but I think it’s realistic.”

The defeat to China and missing out on Rio became more of a driving force than a millstone and although Ireland must play against full-time athletes from other countries, the team are past wheeling out excuses of disparity between nations.

There is also a sharper edge to this World Cup than before and that is the team that finishes bottom of their pool goes straight home.

There are no final placing play-off matches for the fourth-placed team, which leaves the possibility for some countries of a World Cup comprising of only three pool games.

“It took us time,” says Mullan of getting past the heartbreak of China and Rio. “But we went the following year to New Zealand to play in an invitational tournament before they went to the Olympics. After that tournament I think we put the disappointment behind us and turned it into a real positive and a real driving force.

“We knew then we were capable of it because we had come so close. All the training and matches we’ve played since we’ve definitely taken our learnings from that match [against China] and used them in a positive way.”

Ireland face the USA, India and then England in the final pool match. That sets up the Irish team in the biggest match of the opening phase. England are current Olympic champions, having beaten the Dutch in Rio after a penalty shoot-out, and are ranked at number two in the world.

They are also playing on home soil in Queen Elizabeth Park, the same campus where the London 2012 Olympic Games were staged.

But Mullan sees that as a double-edged sword for the hosts. Ireland have a reputation for fearlessly taking on better-resourced, higher-ranked countries and coming out on top. There is a pride within the Irish team concerning that grit and edge, which they have traditionally been able to bring into big matches.

“To get to a quarter-final that would be well above our ranking. But we definitely think we are capable of it,” says Mullan. “If you look back at our results over the last couple of years we have proven we can do it. We are as hungry as ever.

“We play England in the last game, which in England is going to be an amazing experience. We are really, really excited about that game.

“They will be playing in front of their home crowd so they might feel the pressure a bit. I think we really do carry that Irish mentality of coming through and being aggressive, catching people when they are maybe on the back foot and going for it.

“They are Olympic champions so they will be wearing some sort of pressure coming into it. They are doing a lot of promotional work so it will be a big game for them.”

The Irish team now have a sponsor in Dublin-based finance company SoftCo but many of the players are working or students. Mullan has just finished a Masters in Biomedical engineering after six years in UCD. Originally from Coleraine, the 24-year-old is already heading towards 150 caps.

Her motto of ‘treat every match you play as if it’s your last’ comes from growing up in a family of two older brothers and two younger sisters, the brothers particularly dispensing tough love to their younger sister.

But her sporting life did not begin on an Astroturf pitch with carbon fibre or Kevlar sticks but on the camogie paddocks of GAA club Eoghan Rua in Coleraine.

It was only at school in Dalriada that hockey was encouraged by former Irish player and teacher Bridget McKeever.

“We aren’t professional athletes but we find the time,” she says. “Whatever to make sure we get the gym sessions and the running sessions done. Any team we have played we have kept up with them, up to the pace they play at. I would say we are definitely on par physically and against certain opposition we would consider ourselves as fitter.

“We play quite a free-flowing game and don’t rely on one or two individuals. We play a lot of two-touch attacking hockey. So you need speed and you need athleticism throughout the whole team. That we definitely have.”

The first-placed team in each of the four groups goes straight through to a World Cup quarter-final. Fourth in each group goes home with second- and third-placed teams playing off to provide four more quarter-final sides.

“Over the last few years there are always teams that go out to a quarter-final and on the big day maybe underperform,” says the Irish captain. It’s always the better team on the day that goes through, not necessarily what you have done in the past.”

We know what Ireland have done in the past. Taking the next step and emerging from the group, that is another thing entirely.