America at Large: Women’s boxing punching well below its weight

Can a sport be deemed professional if most participants cannot earn a living wage from it? 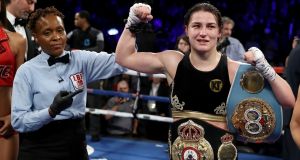 When she climbs through the ropes to take on Katie Taylor at the O2 Arena in London on Saturday night, Kimberly Connor may be introduced as “The fighting pride of Little Rock, Arkansas” or by some variation of her nickname “Killa”.

Less likely to be mentioned are the facts that she’s a licensed estate agent, co-owner of Scalded Dog Trucking and somebody known to climb roofs for the family’s construction company. A professional boxer in name, like so many other female fighters, she makes most of her living away from the ring. A small yet significant detail.

Taylor’s previous opponent Victoria Noelia Bustos was in the same boat. The Argentine came into their bout in Brooklyn earlier this year as the IBF lightweight champion of the world, an impressive title except she’s forced to supplement her fistic earnings handling the accounts at her father’s painting business in Rosario.

Jessica McCaskill, who objective judges reckon earned at least a draw against Taylor at York Hall last December, is an investment banker in Chicago, putting in nine and ten hour shifts at her trading desk before she ever gets to the gym to don gloves. How much better might she be if she didn’t have to commute to a day job?

Awkward but legitimate questions. Can a sport be deemed truly professional if most of those participating cannot earn a living wage from it? More pertinent yet, how fair is it that an elite cadre of women at the very top can devote themselves full-time to working at their craft while so many of those trying to defeat them in the ring cannot?

These and other disparities are blighting the distaff side of the game. If the simultaneous emergence of Taylor, Clarissa Shields and a handful of others who move the box office needle has heightened the profile like never before, the increased glare has brought deserved scrutiny too.

Earlier this year, Thomas Hauser, doyen of boxing writers, wrote a paean to Taylor, describing her as a “real” champion and speculating that she will soon hold all four editions of the lightweight belt.

However, he also quoted John Sheppard, the sport’s record keeper, outlining that the various sanctioning bodies have created 1870 belts for women fighters even though there are only 1430 of them active at this time. That there are substantially more titles available than there are boxers to hold them tells its own story.

Shields, America’s two-time Olympic gold medalist, took five fights to win her world title. Taylor garnered the WBA lightweight crown in just her seventh outing. Chantelle Cameron, a British fighter who never even qualified for the Olympics, picked up the IBF’s version of the lightweight belt in her fifth contest, her second ever against a woman with a winning record. When the route to the top is so facile and quick, it undermines the credibility of the whole enterprise.

This week last summer, Taylor battered Jasmine Clarkson around the Barclays Center in Brooklyn in her first fight on American soil. An event designed to introduce the woman from Bray to boxing’s largest market, it served merely to illustrate the biggest issue facing the sport.

Clarkson arrived in New York from Texas as the 47th ranked lightweight in the world, a ranking that looked utterly ridiculous given she had won four out of her 12 fights to that point.

Not only that, those triumphs were spurious enough. Two came against novices on their second time out, the others were both over the same journeywoman opponent, Lisa Marie Lozano. Game as they come, brave to the point of folly, Clarkson had no business taking on Taylor, a woman on a quest to become the best pound for pound female fighter on the planet.

It is the nature of professional boxing that all contenders must pad their resumes with soft wins over patsies, and mismatches have forever been part of the fabric of the game.

Even still, Clarkson’s biggest attribute seems to be she’s available to travel anywhere, to lose to anyone. Just three weeks before her one-sided embarrassment against Taylor, she earned a lot less money in a defeat by Kimberly Connor at a casino in Baton Rouge, Louisiana.

That such a lacklustre competitor has no difficulty finding bouts is a sorry commentary on the quality and quantity of suitable opponents in the lightweight division, in particular, and the sport in general.

Connor’s own resume bears testament to that. A professional ledger of 13 wins, three losses and two draws appears respectable enough. However, two of those victories came in the space of a fortnight in 2016 against Kim Colbert, a card-filler who has managed to win a single contest since 2004.

Even allowing for the fact she missed nearly four years when giving birth to twins, “Killa” has not defeated an opponent with a winning record since 2012. That was a few weeks before her 32nd birthday. She’ll be 38 this October. And we are supposed to regard her as a serious threat to dethrone the former Olympic champion this weekend.

This is not a Katie Taylor problem either. It is something bedevilling female boxing as a whole, threatening its expansion at arguably the most crucial stage of its growth. A Kazakh fighting out of Germany, Christina Hammer holds the WBO and WBC versions of the middleweight crown.

Last month, she put her belts on the line against Tori Nelson in a contest shown live on Showtime television in America. A full-time pro, Hammer has an extensive endorsement portfolio with a line of fitness DVDs, an eponymous nutrition brand and a contract to model sports bras. Nelson is a 41-year-old single mom who works out in between parenting and waiting tables at a pancake house. Guess who won?

Two decades ago, it was estimated there were around 1,000 female professionals. That the number remains stubbornly less than 1,500 today, a tiny fraction of whom are properly full-time, is worrying. This is why Taylor and Shields and the other champions are in an invidious position. If they can keep this show on the road, more young girls may tune in and be inspired. They will enter gyms, deepen the talent pool, eventually improving the quality of competition and swelling the purses enough so that more women can be genuinely full-time professionals.

Doing that requires the assistance of others involved in the game. After a 15-year hiatus, Showtime has televised eight cards featuring women in the past two years. That’s a start but promoters must do much more to foster public interest.

UFC has similar issues with a dearth of quality competitors yet seems to do a slicker job showcasing and hyping their female talent and convincing the sceptics to take a closer look.

Back in the days when Christy Martin blazed a trail for women boxers, with a notable assist from Ireland’s own Deirdre Gogarty, the New York Times profiled her as the best woman fighter in the world but, taking into account the dearth of serious challengers for that title, famously described her as “The Big Kahuna on a very small beach”. That was 22 years ago. The beach remains smaller and less populated than it should be.