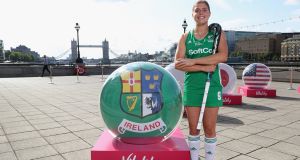 Nine months since qualification was assured, Ireland’s women stand on the cusp of the World Cup, looking to do themselves justice on the sport’s elite stage.

It is their first World Cup since 2002, finally reaching one of the sport’s top events after gut-wrenching playoff defeats for both London and Rio Olympics.

This week the self-titled Green Army find themselves in an imposing four-team group from which three nations will advance to the knock-out phases.

The US are up first in London at 6pm on Saturday, a metronomically physical side with an outlook built extensively on being harder working and fitter than their opponents.

They rank seventh in the world but Ireland have nicked a couple of wins off them in the last three years, most notably a 2-0 victory in the group stage of the Olympic qualifiers in 2015.

India, in game two next Thursday, represents the biggest hope of the win Ireland would need to stand a chance of advancing. The gap between their 10th and Ireland’s 16th rating is paper-thin with Ireland having the better record in recent times.

Indeed, they were the opponents Ireland beat to copperfasten their ticket to London, with Katie Mullan and Lizzie Colvin dramatically swinging the tie their way. It was a day they turned from a team defined by near misses and heartbreak to winners, steeped in character.

For this tournament, the squad has made all manner of sacrifices to be in the best shape they can be. The likes of Nikki Evans, Anna O’Flanagan, Nicci Daly and Chloe Watkins – among others – have put work on hold for the past nine months to play full-time as much as possible.

It is also a team of high-achievers in many realms. Mullan is an All-Ireland intermediate club winner with Coleraine’s Eoghan Rua. Deirdre Duke played underage soccer for Ireland; Daly played with the Dublin footballers while Lena Tice, at just 20, has over 50 caps in both cricket and hockey.

In a World Cup group featuring three full-time professional teams, former skipper Megan Frazer – who chose hockey after initially getting a call-up for Northern Ireland’s underage soccer teams – says knowing how much people have given to hockey and sacrificed to be in London will stand to her side in the trenches.

“They are all paid to be there,” Frazer said ahead of the tournament. “With Ireland, we are here by desire. To have such a strong bond of friendship with the people you play with, you can rely on them with everything you have and that can definitely impact a result.”

Her name was something of a surprise inclusion, with coach Graham Shaw taking a gamble of sorts on her fitness following three bouts of surgery since injuring her knee in October 2016. She has played just six games since then but has a rare game-changing ability, something that Shaw feels could make a massive difference in London.

The squad finish off their group with the big one, facing England - a side they haven’t beaten since the early 90s - in front of an already sold out 15,000 seater stadium, something for any Irish player to relish.

All games broadcast via BT Sport