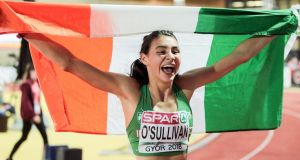 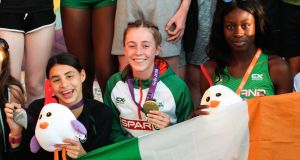 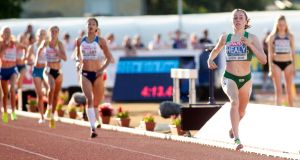 Ireland’s Sarah Healy on her way to winning gold at the European Athletics Under-18 Championships in Gyor, Hungary. Photograph: Sasa Pahic Szabo/Inpho 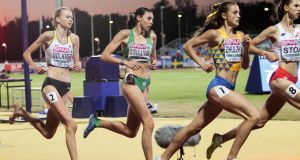 Ireland’s Sophie O’Sullivan on her way to finishing second in the 800m at Gyor, Hungary. Photograph: Sasa Pahic Szabo/Inpho

Off the top of my head just some of words used to describe the sport of track and field over the last year or so.

Just some of the words used to describe the sport of track and field over the last week or so, and, off the top of my head, here’s another one: alive.

We live in fickle times, and some of have us have been around this sport long enough to know good days and bad days and not be fooled by either. And most Irish athletes will tell you how much we like to kiss them when they’re up and kick them when they’re down.

Every sport is somewhat cyclical and yet there is something both innate and irrepressible about track and field that allows it to constantly regenerate itself. For a sport sometimes dubbed in the minority there is also still major appeal, and there was ample of evidence of all that throughout the two underage championships happening over the past week.

No one is being fooled into thinking they’re anything more than a stepping stone to what potentially lies ahead – starting with the European Under-18 championships over in Gyor, Hungary, and the World Under-20 championships still happening up in Tampere, Finland. And again there is no more treacherous journey in sport than what lies ahead for the young athlete.

The signs on both fronts are nonetheless assuring: the international appeal of track and field is actually widening rather than narrowing, and Irish athletes are still well capable of mixing it with the very best of them.

It’s certainly been a while since any Irish athletics team surpassed expectations, instead of the other way round. The three gold medals won last weekend in Hungary were promising and inclusive and exciting on several levels: Sarah Healy’s distance running double, Rhasidat Adeleke’s gold in the 200m, and Sophie O’Sullivan’s silver in the 800m – each won with the sort of energy and authority to suggest there is more to come. Patience Jumbo-Gula might well have made the medal podium too in the 100m only for an off-start, and no one knows that better than her.

Healy’s progress to this early stage of her career is particularly promising – her coach Eoghan Marnell at Blackrock AC in south Dublin ensuring she stays cautiously ambitious, still happy to let her play hockey in the off season and thus avoid the early specialisation of sports which can later prove so compromising. Already made clear is her main target for 2019: her Leaving Cert at Holy Child Killiney.

These weren’t just any entry-level championships either: some of the winning performances in Gyor would already hold up on the senior stage, and with 1,063 athletes from 50 nations no medal was easily won. And while it may have been a purely cosmetic exercise – some might even say cynical – all 1,063 athletes went through a mandatory “I Run Clean” anti-doping education programme, and that’s already a head start on most other sports.

Following that level of success in Tampere – among the 1,466 athletes from 160 nations – was no easy task, the Under-20 championships a step up in more ways than one: physically first, mentally second. Gina Akpe-Moses had her own expectations too, the reigning European Under-21 champion from last summer, and already dubbed the future of Irish sprinting.

In making her 100m final – negotiating a heat and semi-final – Akpe-Moses lived up that billing, finishing eighth behind the Jamaican Briana Williams and the American Twanish Terry, two names already looking destined to make a name on the senior stage.

Other names too emerged out of the proverbial nowhere: Lalu Muhammad Zohri winning the men’s 100m, a first medal of any colour for Indonesia in the 32-year history of the Under-20 championships, prompting immediate congratulations from the nation’s president, Joko Widodo; Nozomi Tanaka from Japan winning the women’s 3,000m, leaving all the hot favourites from East Africa in her wake, compatriot Yuki Hashioka making even more history for Japan as he won a historic long jump gold, defeating Cuban favourite Maikel Vidal in the process; and Hima Das winning the women’s 400m for India, the country’s first gold medal in the event, and the race which state TV broke off to cover live from Tampere.

Again a properly global sport with a still properly global appeal, and none of the 17 athletes on the Irish team have looked in any way out of their depth. Ciara Neville made the semi-finals of both the 100m and 200m; Ireland’s fastest schoolboy Aaron Sexton (also pretty handy at rugby) ran a lifetime best of 21.06 to make his 200m semi-finals, and definitely not finished yet is 17-year-old high jumper Sommer Lecky from the Finn Valley club in Donegal, who produced the perfect first-time clearances at every height, up to and including 1.84m, to make Sunday’s final.

It’s been a while too since any Irish team has had so many athletes across a range of events, and certainly the first time it’s been this inclusive and representative. Because in making the 4x100m relay final, after Akpe-Moses, Adeleke and Jumbo-Gula combined with Molly Scott, there is now every chance they can sign off with another medal-winning performance.

Scott actually ran the first leg, followed by Akpe-Moses, then Adeleke and Jumbo-Gula, who both came straight to Tampere from Gyor, all four running with small tricolours painted onto the side of their cheeks. Neither the Americans nor the Jamaicans qualified, and although the German women ran faster, 43.88 seconds to their 44.27, the Irish quartet are exactly where they want to be for final time on Saturday afternoon (2:04pm Irish time).

Relaxed, confident, ready, cheerful and, like the sport of track and field, with good reason to stay hopeful for the future.