Likes of Healy, Jumbo-Gula, Akpe-Moses and Adeleke are all exciting prospects 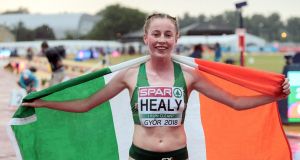 There are some sporting success stories that need to be talked up and talked down at the same time, the ones you want to fist pump with one hand and wave away with the other.

Because no one is arguing that a European Under-18 athletics championships are anything more than a stepping stone to what potentially lies ahead. And there is no more perilous journey in sport than what lies ahead for the young athlete.

Still it’s impossible to ignore events over in Gyor in Hungary right now, as 17- year-old Sarah Healy boldly completed the first half of a middle-distance double with a victory in the 3,000m. She ran away with it, as we used to say. Patience Jumbo-Gula still laid down a marker of what’s to come, even when finishing outside of the 100m medals. This is the taste of the new generation and in more ways than one.

They’ve been here before too. Jumbo-Gula is just 16 and already made a name for herself when winning the 100m bronze at the European Youth Olympics last July, where Healy also won gold over 1,500m – and so far both young athletes are hitting all the right stepping stones at exactly the right time.

Jumbo-Gula will have gained plenty of experience too from her 100m final, a poor start on the wet track costing her a medal, as she ended up fifth. Having run a championship best of 11.59 in her semi-final, faster than the gold medal winning time of 11.87, there is clearly more to come there.

What they also bring is a reminder that nothing sparks a sporting debate quicker than the subject of nationality. And that sometimes what we know and what we think we know can be two completely different things.

Healy, in both looks and name, is clearly a product of the Irish athletics environment and system and yet equally so is Jumbo-Gula, who was born in this country to Nigerian parents, and has never known or considered herself to be anything other than an Irish athlete.

She’s not alone either. Rhasidat Adeleke, who runs with Tallaght AC and is still only 15, is another live medal prospect in the 200m in Gyor, and on Sunday will race with Jumbo-Gula as part of the sprint medley relay.

Adeleke actually beat Jumbo-Gula in the 100m at the Irish Schools Championships in Tullamore last month, and they immediately embraced each other afterwards, a tell-tale sign of their mutual respect and connection. With names like Sophie O’Sullivan in the mix this is nothing but a sweet taste of the new generation.

And Ireland, remember, also boasts the reigning European Under-20 100m champion in Gina Akpe-Moses, who this time last year won the gold medal in Grosetto, Italy and has since moved on to the bigger stage. Next week, Akpe-Moses competes at the World Under-20 championships in Tampere, Finland. Her heart is already set on representing Ireland at the Tokyo Olympics, now just two years off, and so far she too is hitting all the right stepping stones.

Both Jumbo-Gula and Akpe-Moses began running at St Vincent’s school in Dundalk, with Akpe-Moses showing the way, though with some mixed results early on. At age 15, and already the standout athlete at her school and her club, Blackrock AC, she was gently taken aside by Fintan Reilly, one of her club mentors, and politely told she needed to become more disciplined with her training. Talent, he told her, would only take her so far. The rest came down to hard work and dedication.

Part of the issue there was Dundalk has no running track (and that’s another story), and also Akpe-Moses’ parents, who emigrated from Lagos, Nigeria when she was three years old, didn’t have the time or resources to be driving her around the country to races and proper training venues.

So Reilly set her up with sprints coach John Shields in Dublin, and from then on, her older sister Joy took her down either by train or bus to the Morton Stadium, twice a week, in order to seek those necessary improvements.

Akpe-Moses was determined to make it, and still is. Two years ago the family moved again to Birmingham, and although she now trains with Birchfield Harriers, still competes for her Irish club, and again has never known or considered herself to be anything other than an Irish athlete.

Their progress has been naturally conspicuous, and not just because these are spring events where in the past most Irish athletes have had to settle on being the also-rans. But in many ways Ireland is just playing catch-up with the rest of the world, many of the World Cup squads in Russia over the past few weeks another reminder of that, even if some people still have a problem deciphering the difference between what it means to represent your country and what country represents you.

Although for those who do get to compete on the international stage it should never be decided by something as narrow-minded as the spelling of their name or the colour of their skin.

Nationality, in the sporting context or otherwise, has never been decided on strictly fixed terms, and even less so these days.

According to the latest census, almost 60,000 people identified their ethnicity as Black African or Black Irish, when 20 years before that figure was just 4,697. It doesn’t end there; cleaning up in several underage distance races so far this summer has been Efrem Gidey, from Le Cheile Tyrrelstown in west Dublin, less than a year after arriving in Ireland from Eritrea as an asylum seeker.

Gidey made history in the Leinster schools 5,000m by lapping the entire field, and last weekend won the Irish junior title over the same distance. He was just one of the 41 unaccompanied minors who arrived in Ireland from Calais under the Irish Refugee Protection Programme (IRPP), having spent several years in refugee camps.

It may only be a matter of time before Gidey represents Ireland on the international stage, and if or when he does he too will be an entirely Irish athletics product.

Healy’s preferred event, meanwhile, is the 1,500m, and she’s already qualified for Sunday’s final, having run 10 seconds faster than anyone else her age this year. Even at that pace this new generation can’t grow up fast enough.