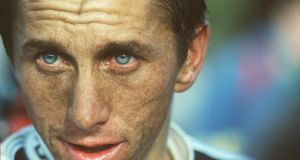 Somewhere between the wildly hysterical cheering and rattling of cowbells came the hissing and the booing. The last thing any rider wants to hear on the razor edge of an Alpine stage in the Tour de France is this sort of carry-on, and at times Greg LeMond must have been wondering what he did to deserve it.

The Tour has never been a popularity contest, but the French public and especially the French cycling press have always known what they like and what they like to believe in – and also being able to tell the difference.

LeMond wasn’t universally popular on that 1986 Tour, especially among sections of the French public and press loyal to their man Bernard Hinault, LeMond’s team-mate at La Vie Claire, who went into that race seeking a record sixth win. It sometimes spilled out onto the roads too, including Stage 18 from Briançon to Alpe d’Huez.

This outer tension and inner rivalry is all neatly detailed in The Comeback: Greg LeMond, the True King of American Cycling, and a Legendary Tour de France by Daniel de Visé. By cosmic coincidence it arrived in my letterbox this week – a just-published 371-page tour de force through LeMond’s entire cycling career, and its at times difficult aftermath.

LeMond v Hinault in 1986 reached its zenith on Alpe d’Huez, after Hinault had made one last attack on the maillot jaune, worn by LeMond, only for the American to claw him right back. They reached the summit finish together, LeMond throwing his arm around Hinault like friends out on weekend ride, before allowing him to win the stage.

Still, Hinault declared “the Tour is not finished”, and later LeMond complained about being “up against a terrible nationalism”. Then Tour director Jacques Goddet actually warned LeMond that evening, “Be careful, there are many who do not want to see you win.” He did win, de Visé writing about his arrival in Paris: “His careworn face was not that of a champion but of a victim, a man who had survived three weeks of emotional torture.”

All of them except for one said LeMond was clean, and his only evidence was LeMond’s breathtaking time trial in the final stage of the 1989 Tour

This cynical treachery between the team and the public and the press is laid out over two successive chapters, “The Deal” and “the Betrayal”, and by cosmic coincidence echoes a lot of what’s going on right now between Geraint Thomas and Chris Froome at Team Sky, including some of the booing and hissing they got on Alpe d’Huez on Thursday.

Only it’s also easy to tell the difference. LeMond’s problem wasn’t that he was American and not French, but that he was often seen eating burgers and ice cream and playing golf on the rest days; he was unpopular for bringing his wife on the Tour and, worst of all, for speaking openly and disapprovingly about doping.

That doesn’t mean the French or indeed anyone else didn’t believe in him. In his author’s note, de Visé says he interviewed dozens of cyclists who competed with LeMond, and at one point or another asked most of them whether they thought he raced clean. All of them except for one said LeMond was clean – only he didn’t want to be named, and his only evidence was LeMond’s breathtaking time trial in the final stage of the 1989 Tour, when he won back his maillot jaune, famously surpassing Laurent Fignon by a mere eight seconds down the Champs-Élysées, clawing back a 50-second deficit, still the closest finish in Tour history. He won again in 1990.

And that was after LeMond was accidentally shot in the back, nine months after his 1986 Tour, hence the title of de Visé’s book. Coincidentally or not, de Visé also presents another big difference, because LeMond didn’t win that 1986 Tour towards the tail end of his career, as a track or time-trail convert with a suddenly skeletal body and unlimited strength, or a rider originally signed for essentially domestique purposes.

LeMond was just 25 years old. He first came to Europe in 1978, aged 17, and The Comeback describes in credible detail how a year later he won the World Junior road race title. How, two years after that, courted by Hinault himself and celebrated directeur sportif Cyrille Guimard, he was racing in the pro peloton with Renault-Elf-Gitane.

His life was saved by a primitive mobile phone, a police helicopter and a nearby hospital where the surgeon specialised in gunshot wounds

How in 1983, aged 22, LeMond became the first American to win the World Championship. And how he first took to the Tour de France: 1984, third – best young rider; 1985, second – beaten only by Hinault, his team leader; 1986, first – the first and still last American Tour winner (given the erasure of the other two).

In an early chapter, “LeMonster”, de Visé describes some of LeMond’s earliest bike races, such as the 1976 Nevada City Classic, a week before his 15th birthday, where he finishes second. “I’d like to turn professional and try to win the Tour de France,” LeMond declared afterwards, sounding like one of those rare sporting freaks who usually go on to achieve such things. Not only after signing with the richest team in the peloton, built on such nonsense as marginal gains.

What happened after his 1986 Tour win, described in the chapter “Twenty Minutes” – how long away from death he was after the shooting – certainly reads like a minor miracle. It was Easter Monday 1987, near his home in the Sacramento Valley, when he was out turkey-shooting and was accidentally shot in the back by his brother-in-law. His life was saved by a primitive mobile phone, a police helicopter and a nearby hospital where the surgeon specialised in gunshot wounds, “part of a long chain of small miracles”. Although what ultimately saved him was his own cardiovascular strength from years of cycling.

Given his own miracle, LeMond might well have believed in Lance Armstrong, but instead was among the first to question him, and that certainly cost him, including a mental breakdown where he eventually revealed the abuse suffered as a 13-year-old growing up in Nevada.

The problem for Team Sky and whatever unfolds between Thomas and Froome in the Pyrenees next week is not that the French public or the French press don’t like them for what they are, but for what they’re not.

The Comeback: Greg LeMond, the True King of American Cycling, and a Legendary Tour de France by Daniel de Visé is published by Atlantic (£20.49)

Champions League final likely to be moved from Istanbul