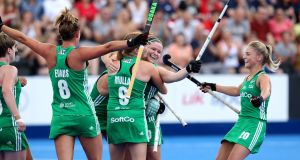 The Irish team celebrate after Shirley McCay scores during the World Cup match against the USA at the Lee Valley Hockey Centre in London. Photograph: Sean Dempsey/EPA

Deirdre Duke’s glorious counter-strikes sent Ireland’s women into dreamland as they won their first World Cup tie in 16 years with a breathtaking 3-1 win over USA on Saturday evening in London.

It was Ireland’s first win in a World Cup group stage since 1986, 13 games in total, and came at the expense of an illustrious, fully professional outfit who had finished fourth at the last edition.

For all of the Irish team, it was their biggest game to date, played in an imposing arena under the massive Lee Valley embankment.

It provided plenty of scope to freeze but coach Graham Shaw had the team mantra just right. Almost to a player, the players preached the value of relishing the challenge, savouring the moment. In the anthems, the big screens portrayed wide grins and laughs as they soaked in the atmosphere, with large pockets of green apparent.

There were no glares into the middle distance, no tears nor introspective closed eyes, thinking of the pain that had gone before to eventually reach this stage.

“It’s a dream to score in a World Cup, even to play in a World Cup. We’ve never been here before, we are ranked 15th out of 16 teams. There’s no pressure. So if you can’t enjoy a moment like that, your national anthem with all your friends and family there, what’s the point?”

Just a few seconds after Duke was introduced to the fray, she was on the end of Róisín Upton’s 70-metre pass all alone, one-on-one with goalkeeper Jackie Briggs.

Coming so early, it was a chance that easily could have shown tightness, but the striker stayed composed to shift right and get enough elevation to clear the keeper.

The pass from Upton was indicative of a smart game-plan. The world number seven US side are famed for their aggressive, pressing game, using their physicality to swarm the ball.

It leads to a high turnover rate in dangerous positions, but does leave space a-plenty once you break the first line. Coach Shaw positioned his outlets far and wide for the early ball.

Chloe Watkins and Gillian Pinder had room to roam with rare abandon, and the latter was soon upended. It should have been a penalty stroke but the lesser sanction of a penalty corner produced a goal nonetheless, with Ireland’s most-capped sportswoman Shirley McCay sweeping home for 2-0 in the 12th minute.

The Americans responded in kind when Michelle Vittese picked out Margaux Paolino on the right of goal, guiding in from a very smart set-piece move.

It burst the dreamy bubble a little bit as the full-time US outfit – fourth place finishers at the last World Cup – threatened to grind their way back.

A Vittese slap ended up on the crossbar and some scurrying defence was needed – Zoe Wilson to the fore – to keep the narrow lead intact.

The tactical arrangements, though, meant there were always holes to be found. Katie Mullan should have grabbed a third but controlled the ball rather than going first time.

Into the second half, skipper Mullan stung Briggs’s right boot and another Irish corner was volleyed off the line before the decisive, and controversial, clincher.

The US misread a signal from umpire Michelle Meister and set up for a long corner. Instead, Ireland took a quick free out and, in two passes, were four on two at halfway. Nikki Evans found Duke in acres of space; again she took her time before smashing in from six yards.

The US called for a video referral, but hockey’s variation on VAR does not allow reviews from so far away from the decisive action, and the goal stood.

Now was the time for the defence to stand up. Crucially, Ayeisha McFerran dived to tip away Caitlin van Sickle’s rising shot but, while the goalkeeper was awarded player of the match, the back line limited any other heart-stopping moments.

It means one more positive result against either India on Thursday and England next Sunday will ensure progress to some form of knock-out game.

No fears, no pressure, just more moments to enjoy and savour.